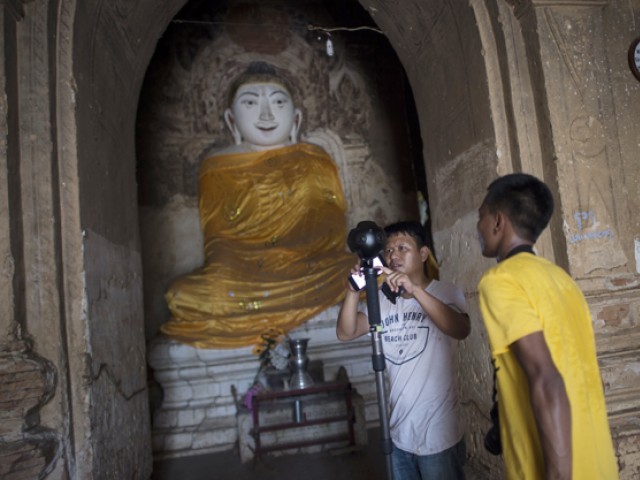 In this photograph taken on August 6, 2017, Nyi Lin Seck (C) and another member of his team set a 360?4K video camera with which they are documenting the crumbling 700-year-old walls of the ancient city of Bagan. PHOTO: AFP

YANGON: Gasps echo across the hall as the Myanmar school kids trial virtual reality goggles, marvelling at a device that allows some of Asia’s poorest people to walk on the moon or dive beneath the waves.

“In Myanmar we can’t afford much to bring students to the real world experience,” beamed Hla Hla Win, a teacher and tech entrepreneur taking virtual reality into the classroom. 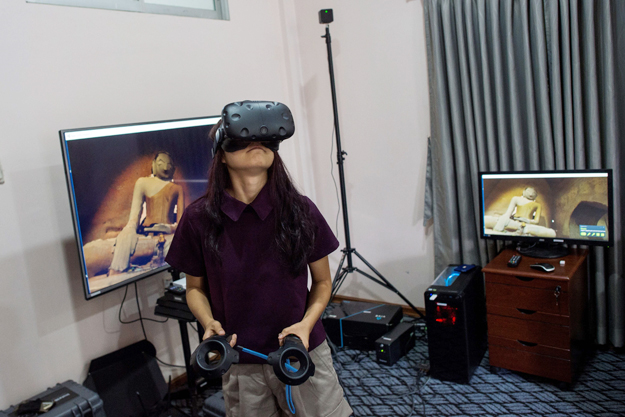 In this photograph taken on August 11, 2017, a woman wears a VR goggles as she watches some of the 360-degree 4K video footage that a specialized company recorded at the ancient city of Bagan and its crumbling 700-year-old buildings. PHOTO: AFP

“If they’re learning about animals we can’t take them to the zoo… 99 per cent of parents don’t have time, don’t have money, don’t have the means,” she added.

Few countries in the world have experienced such rapid discovery of technology than Myanmar which has leapfrogged from the analogue to the digital era in just a few years.

During the decades of outright junta rule, which ended in 2011, it was one of the world’s most isolated nations, a place where a mobile phone sim card could cost up to $3,000. 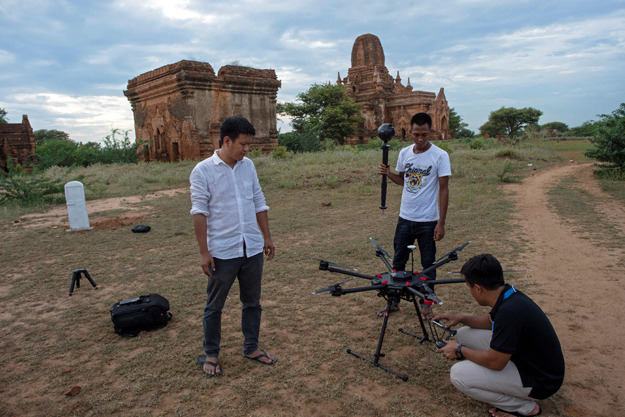 In this photograph taken on August 5, 2017, Nyi Lin Seck (L) and two members of his team stand next to a drone carrying a 360?4K video camera with which they are documenting the crumbling 700-year-old walls of the ancient city of Bagan. PHOTO: AFP

For half a century its paranoid generals cut off the country, restricting sales of computers, heavily censoring the Internet and blocking access to foreign media reports.

But today phone towers are springing up around the country and almost 80 per cent of the population have access to the Internet through smartphones, according to telecoms giant Telenor. 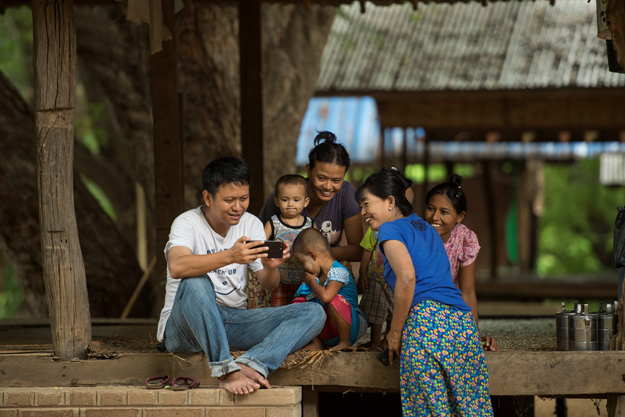 In this photograph taken on August 6, 2017, Nyi Lin Seck shows some of the 360?4K video camera footage he took of the crumbling 700-year-old walls of the ancient city of Bagan to women and children residing in a Buddhist monastery located nearby. PHOTO: AFP

Tech startups are emerging around the commercial capital Yangon, many seeking to improve the lives of rural people, most of whom still live without paved roads or electricity.

“The increase in activity from last year till now — new startups, more people determined to become entrepreneurs and working in the tech sector in general — is significant,” said Jes Kaliebe Peterson, CEO of community hub Phandeeyar.

Virtual reality is the latest advance to cause a stir, with a handful of entrepreneurs embracing tech for projects including preserving ancient temple sites to shaping young minds of the future.

The Phandeeyar incubator works with more than 140 startups. Among them Hla Hla Win’s virtual reality social enterprise 360ed which is using affordable cardboard VR goggles attached to smartphones to break down barriers in Myanmar’s classrooms.

She founded the non-profit last year after 17 years working in the woefully underfunded education system in a bid to bring learning to life.

“I see it as an empathy machine where we can teleport ourselves to another place right away,” she told AFP.

And it’s not just school children who benefit from stepping into places they could only ever dream of visiting.

360ed has used virtual reality to help Myanmar teachers attend training courses in Japan and Finland and is working on setting up deals with schools in India, Pakistan, China and Bangladesh. 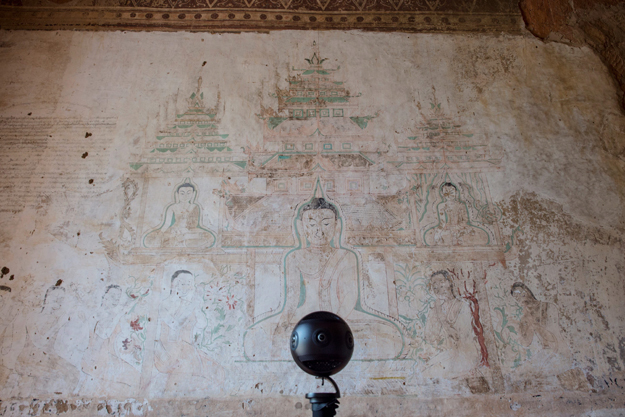 In this photograph taken on August 6, 2017, a 360?4K video camera records a fading mural in the crumbling 700-year-old walls of the ancient city of Bagan. PHOTO: AFP

While 360ed is thinking about the future, Nyi Lin Seck is obsessed with the past.

Some 600 kilometres (372 miles) north of Yangon, the budding tech entrepreneur and founder of 3xvivr Virtual Reality Production launches a large drone into the skies above Bagan, one of Myanmar’s most famous tourist sites. 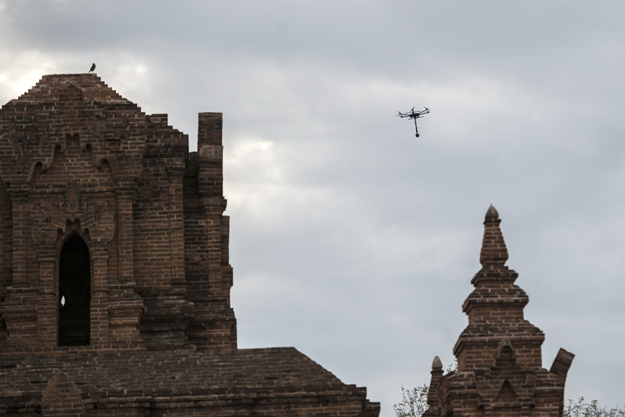 In this photograph taken on August 5, 2017, a drone flies a 360-degree 4K video camera over the ancient city of Bagan as a team of virtual reality experts document the crumbling 700-year-old walls of the ancient city. PHOTO: AFP

The drone, which carries a 360-camera, circles one of the many ninth-to-thirteenth century temples that dot the landscape of what was once a sprawling ancient city.

The data it records allows those with virtual reality headsets to explore the temples, their crumbling centuries-old walls so close it feels like you can touch them.

A former head of the local TV station, Nyi Lin Seck says he makes most of his money providing virtual reality footage for hotels and luxury apartments. 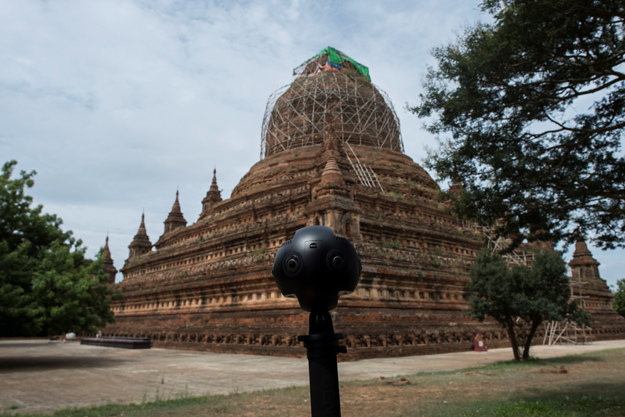 In this photograph taken on August 6, 2017, a 360-degree video camera records the grounds of the crumbling 700-year-old ancient city of Bagan. PHOTO: AFP

But after an earthquake damaged the Bagan site last year, he vowed to use the tech to preserve a digital replica of Myanmar’s archaeological treasures.

“A lot of artworks on the pagodas collapsed and were lost. Using this technology, we can record up to 99 percent of the ancient art,” he says.