India and US have failed to end IoK’s strugg­le for their right of self-determ­inatio­n, demons­trator­s say
By M A Mir
Published: August 17, 2017
Tweet Email 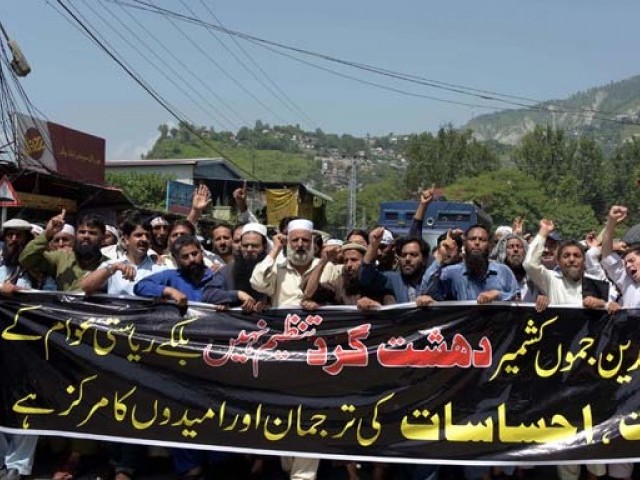 They chanted anti-India and pro-freedom slogans such as “Go India” and “US go back”. PHOTO: MA Mir/Express

On Wednesday, the US had listed HuM as a ‘Foreign Terrorist Group’, seven weeks after it designated HuM Supreme Commander Syed Salahuddin a global terrorist on June 27.

Residents of Azad Kashmir took out a rally in protest of the decision from Burhan Wani Chowk to Gharipan Chowk. They chanted anti-India and pro-freedom slogans such as “Go India” and “US go back” and carried a banner stating that HuM represents the sentiments of Kashmiris across the world and was not a terrorist group.

The protest leaders said both the US and India declared Hafiz Saeed (chief of Jammatud Dawa) and Salahuddin terrorists, but have failed to end IoK’s struggle for their right of self-determination.

“Our properties and bank accounts can be frozen but Washington cannot force us to back out from our genuine struggle for the right of self-determination,” said United Jihad Council (UJC) Secretary General Shaikh Jameelur Rehman.

“Kashmiris will continue the struggle, endorsed by UN through its resolutions, till the final destination, which is freedom from India, is reached,” he added.

Rehman added that the US declared HuM a terrorist outfit in order to please India’s leadership. There are dozens of American official statements on record since 1990 that HuM is the indigenous outfit of Kashmiri people, he said.

The protesters expressed the resolve that Kashmiris will continue to fight for their rights.

Asghar Rasool, a protester, said that by its decision, the US has exposed itself as a nation that does not believe in liberty and freedom of humans.

He questioned why the US and its leadership had remained silent on the rising Hindu extremism in India where cows are being considered sacred than human beings.

Another protester Uzair Ghazali said Kashmiris are fighting under the UN charter and declaring HuM a terrorist outfit was the denial of their fighting spirit.

Ghazali added that Kashmiris will continue the struggle against all odds until their wish of freedom comes to fruition.