Harpal Singh and Yasir Ali do not see the differ­ence in their religi­on, they just see a friend
By Muhammad Shahzad
Published: August 17, 2017
Tweet Email 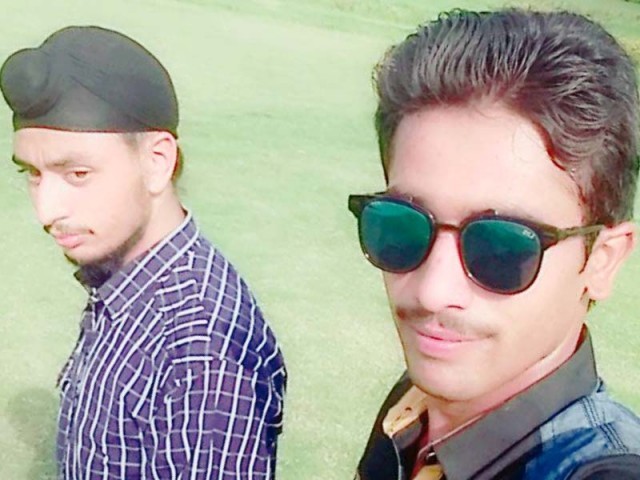 LAHORE: When you see Harpal Singh and Yasir Ali walking with their arms around each other’s shoulders at Gurdwara Nankana Sahib, it looks a scene from the 2015 Bollywood movie ‘Angrej’, a tale of friendship between Muslim and Sikh youths during pre-partition Punjab.

But this is real life and Singh and Ali have a much deeper bond than any fictional silver screen characters can depict. The two teens have been friends since college and share mutual respect for each other religions. Earlier this week, they were both walking around in Gurdwara Nankana Sahib, the birthplace of founder of Sikh religion Guru Nanak and a sacred site for Sikhs.

“My parents and grandparents used to tell us that whenever there was a conflict on water or land issue, their Muslim relatives and neighbours would stand with them against their opponent villagers,” Singh told The Express Tribune.

He befriended Ali just two years ago when they began studying at Heera College Nankana Sahib. Later, he moved to Ali’s neighbourhood from Old Nankana Sahib and their friendship deepened.

Singh explained that since he was new in Ali’s locality, he had to face various issues in settling down. “Ali supported me a lot and sometimes he went out of the way to facilitate me,” he said. “As a result, we became best friends in a very short time.”

Ali, who was at Singh’s side chimed in that they spend most of their time together.

“We just go to our homes to sleep,” he laughed. “We are together in college, play cricket and video-games together and even share one plate to eat.”

To Singh nothing is more precious than their friendship and the difference of their religions has never been a hurdle. Ali, however, admitted that a few times some students had taunted him for befriending a Sikh guy but he has been quick to correct them.

“On a number of occasions I explained to them that the friendship between Muslims and Sikhs is centuries-old. When they tried to argue I simply told them to shut up,” he said.

Ali said that many times he has explained to people that Guru Granth Sahib – the sacred book of Sikhs – was incomplete without Farid Lekha – 100 versus by Baba Farid, who is a Muslim Sufi poet.

“Muslims, Hindus and Sikhs all over the world equally respect Guru Nanak Sahib,” he said. “Even Muslims and Hindu had a dispute after the Nanak Sahib’s death over his burial. Muslims wanted to bury him while Hindus wanted to cremate him.”

Both the communities claimed Nanak belonged to their religion, he added. Ali further said that the founding stone of the Golden Temple in Amritsar, which is the second holiest place for Sikhs, was laid by Mian Mir Sahib – a Sufi poet.

Similarly, Muslims have been paying visit to Nanak Sahib for centuries, he added. Ali also said that many a times his knowledge and explanation of the history of the Sikh-Muslim friendship has left his friends speechless.