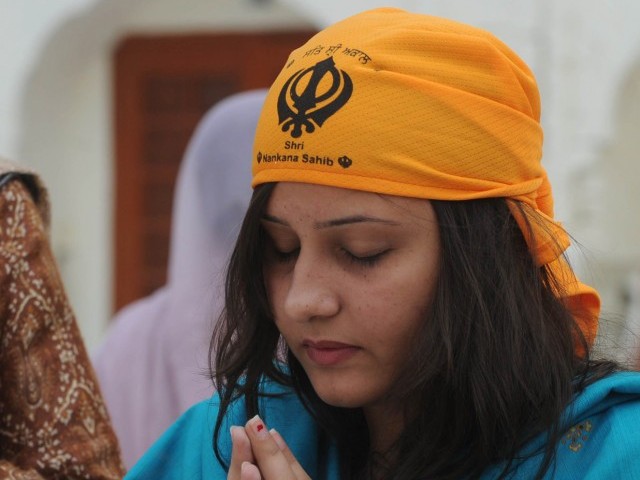 In this file photo, a Sikh devotee from India prays during the 542nd birth anniversary of Guru Nanak Dev at Nankana Sahib. PHOTO: AFP

NANKANA SAHIB: Inside the Gurdwara Nankana Sahib, Shan Singh is sitting and keeping a close eye on devotees. People are coming in their droves to pay their respects at the holy site with Singh repeatedly requesting all visitors to cover their heads.

“These people are mostly Muslims and that is why it is our duty to brief them over the customs involved in paying respects [at a gurdwara],” he comments.

He believes the teachings of Nankana Sahib are the best reflection of religious harmony, peace and tolerance, “As Sikhs, we cannot discriminate. That is why the gurdwara is open to all,” he adds.

“Since it is the Independence Day of our beloved nation, the gathering of Muslims at our holy place depicts that there is peace and equality among all. Our founder Quaid-e-Azam Muhammad Ali Jinnah also held the same belief,” he points out.

Nankana Sahib is considered a small town in Punjab, but is of great significance around the world as it is the birthplace of Baba Guru Nanak. Like other parts of the country, the youth are clad in green and the Sikhs are no different as they wear turbans sporting the national colours.

The area is a hub for celebrations with people roaming the streets to celebrate Independence Day Sardar Balwant Singh, who is also a caretaker of the gurdwara, confirms that the Sikh community is wearing green turbans on the day.

Minorities, the ‘flag-bearers’ of our nation

“Wearing a turban is our religious duty and today, the whole Sikh community is wearing green ones to pay their respect to the nation,” he says. The caretaker adds that people of his faith love the nation in the same way as members of all other communities.

Jamshaid Liaqat, a schoolteacher came to the place of worship from Mandi Faizabad, which is located 30 kilometres away from Nankana Sahib.

When asked about why he brought his two-year-old child along, the teacher says he wants to make the toddler aware from an early age that he must not discriminate over cast, religion and nationality.

He says it is crucial to abolish hatred among people who have been living in the area for centuries.  “We share same culture and norms. It is also my message to all people that humanity comes first. If you hate people on the basis of cast or religion, no one will consider you a human,” he stresses.

Gurudwara Nankana Sahib welcomed all comers. The caretaker were guiding the Sikhs who drank holy water and bowed down in front of Guru Garanth Sahib.

Kapil Raj Singh, media coordinator for Gurudwara Nankana Sahib, tells The Express Tribune that the Sikh community in the country is living peacefully and many of its members are even considering joining the Pakistan Army.

He says although there are some people who are discriminating against Sikhs, most people come from all over the country to show love and respect. He adds as the gurdwara is best reflection of peace and harmony. “I wish my country also becomes a place where we can eliminate all hatred and discrimination.