Recent study says about 30% of the popula­tion in the region would be expose­d to harmfu­l temper­atures­
By AFP
Published: August 4, 2017
Tweet Email 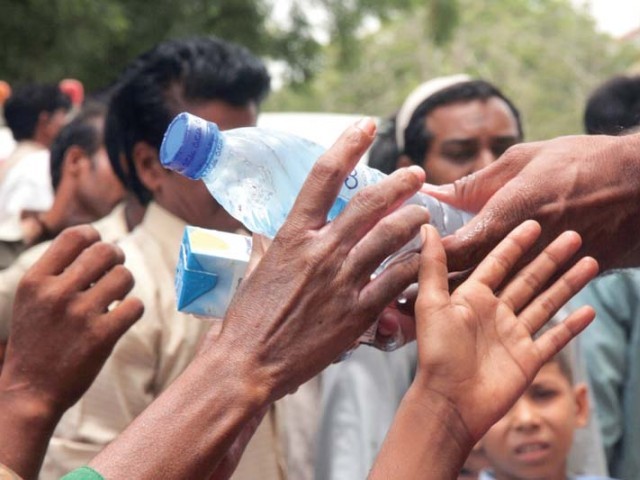 Water bottles and juices were handed out by volunteers during the heatwave in Karachi last year. PHOTO: FILE

The study in the journal Science Advances warned of “summer heatwaves with levels of heat and humidity that exceed what humans can survive without protection”.

The research is based on two climate models. One is a ‘business-as-usual’ scenario in which little is done to contain climate change, and the second is aimed at limiting temperature rise to well below two degrees Celsius, as pledged by more than 190 nations under the 2015 Paris climate accord.

The study is the first of its kind to look not just at temperatures, but at the forecast of ‘wet-bulb temperature,’ which combines temperature, humidity and the human body’s ability to cool down in response.

The survivability threshold is considered to be 35 degrees Celsius, or 95 degrees Fahrenheit.

Under a business-as-usual scenario, “wet-bulb temperatures are projected to approach the survivability threshold over most of South Asia, and exceed it at a few locations, by the end of the century,” said the report.

About 30 per cent of the population in the region would be exposed to these harmful temperatures, up from zero per cent at present, said the report.

The densely populated farming regions of South Asia could fare the worst, because workers are exposed to heat with little opportunity for escape into air-conditioned environments.

“Deadly heatwaves could begin within as little as a few decades to strike regions of India, Pakistan, and Bangladesh, including the fertile Indus and Ganges river basins that produce much of the region’s food supply,” said the report.

India is home to 1.25 billion people, while another 350 million live in Bangladesh and Pakistan.

Already in 2015, the fifth deadliest heatwave in modern history swept over large parts of India and Pakistan, killing some 3,500 people.

But researchers said their models gave cause for hope, too. Under the scenario in which steps are taken to limit warming over the coming decades, the population exposed to harmful wet-bulb temperatures would increase from zero to just two per cent.

Temperatures would still reach dangerous levels (over 31 Celsius), but would not be quite so close to the fatal threshold.

“There is value in mitigation, as far as public health and reducing heat waves,” said lead author Elfatih Eltahirhe, professor of environmental engineering at the Massachusetts Institute of Technology (MIT).

“With mitigation, we hope we will be able to avoid these severe projections. This is not something that is unavoidable.”