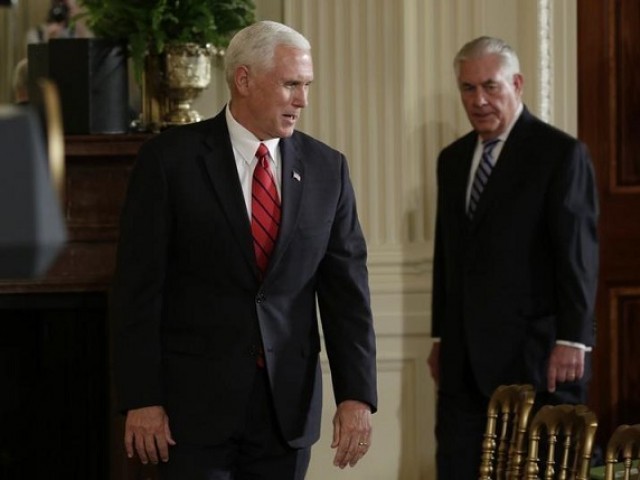 WASHINGTON DC: President Donald Trump grudgingly accepted new congressional sanctions on Russia, the top US diplomat said on Tuesday, remarks in contrast with those of Vice President Mike Pence, who said the bill showed Trump and Congress speaking “with a unified voice”.

The US Congress voted last week by overwhelming margins
for sanctions to punish the Russian government over interference
in the 2016 presidential election, annexation of Crimea and
other perceived violations of international norms. US Secretary of State Rex Tillerson told reporters that he and Trump did not believe the new sanctions would “be helpful to our efforts” on diplomacy with Russia.

Trump has been clear that he wants to improve relations with Russia, a desire that has been hamstrung by findings of US intelligence agencies that Russia interfered to help the Republican against Democrat Hillary Clinton. US congressional panels and a special counsel are investigating. Moscow denies any meddling and Trump denies any collusion by his campaign.

Tillerson, who did business in Russia when he was chief executive of Exxon Mobil, has said repeatedly that the world’s two major nuclear powers cannot have such a bad relationship. “The action by the Congress to put these sanctions in place and the way they did, neither the President nor I were very happy about that,” Tillerson said. “We were clear that we didn’t think it was going to be helpful to our efforts, but that’s the decision they made, they made it in a very overwhelming way. I think the president accepts that.”

Tillerson stopped short of saying definitively that Trump would sign the sanctions, saying only that “all indications are he will sign that bill.” Vice President Mike Pence, at a press conference in Georgia with Prime Minister Giorgi Kvirikashvili, said unequivocally that “President Trump will sign the Russia sanctions bill soon.”

Pence acknowledged that the administration objected to earlier versions of the sanctions bill because it did not grant enough flexibility to the administration, but said it “improved significantly” in later versions. “And let me say that in signing the sanction, our President and our Congress are speaking with a unified voice,” Pence said. White House spokesperson Sarah Sanders said on Tuesday the
sanctions bill was under review and would be signed. “There’s nothing holding him back,” Sanders said at a news
briefing.

Trump has until Aug. 9 to sign the bill, or veto it, or it will automatically become law. In retaliation for the sanctions, Russian President Vladimir Putin said on Sunday that the US diplomatic mission in Russia must reduce its staff by 755 people. Russia is also seizing two properties near Moscow used by American diplomats. Tillerson said Putin probably believes his response was a symmetrical action to Washington seizing two Russian properties in the United States and expelling 35 diplomats last December.

“Of course it makes our lives more difficult,” he said. Tillerson said he and Russian Foreign Minister Sergei Lavrov would meet in Manila on the margins of next weekend’s meetings of the Association of Southeast Asian Nations.

Liquid-filled iPhone cases called back after reports of chemical burns