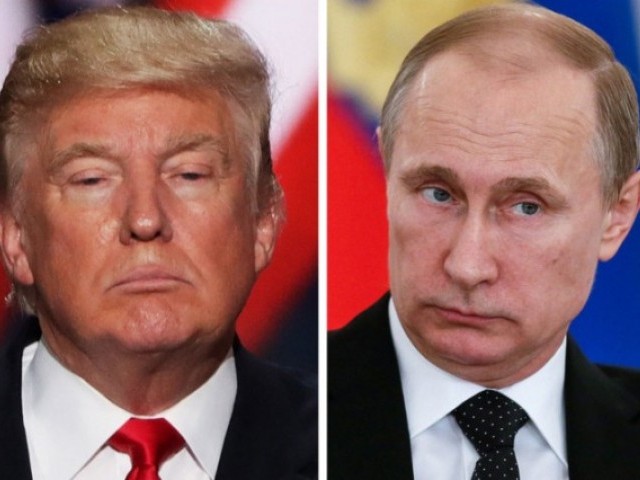 However, Moscow has warned that a program of sanctions imposed by the US can threaten their whole relationship. PHOTO: AFP

WASHINGTON: US President Donald Trump said Sunday it was time to work “constructively” with Russia but ruled out easing sanctions while the countries remained at odds over the conflicts in Syria and Ukraine.

In a series of tweets on his return from Europe, Trump said he had confronted his Russian counterpart Vladimir Putin over evidence from the US intelligence agencies that Moscow meddled in the 2016 election when the two leaders met for the first time in Germany on Friday.

And while he welcomed an agreement for the start of a ceasefire in Syria, Trump said it was too early to consider any easing of US sanctions on Russia “until the Ukrainian & Syrian problems are solved.”

“I strongly pressed President Putin twice about Russian meddling in our election,” Trump said of their meeting on the sidelines of the G20 summit. “He vehemently denied it. I’ve already given my opinion…..”

I strongly pressed President Putin twice about Russian meddling in our election. He vehemently denied it. I've already given my opinion…..

Trump said he and Putin had talked about the idea of setting up what he called “an impenetrable cyber security unit” to prevent hacking in future elections, without giving details.

Putin & I discussed forming an impenetrable Cyber Security unit so that election hacking, & many other negative things, will be guarded..

He also said the two men had discussed the implementation of a ceasefire in Syria which began on Sunday, saying “it will save lives.”

“Now it is time to move forward in working constructively with Russia!”

Syria has been a particular source of friction between the two countries, as Russia is a close ally of President Bashar al-Assad.

Moscow has warned that a program of sanctions imposed by the US, which was tightened last month, threatens their whole relationship.

Trump’s predecessor Barack Obama ordered the seizure of two Russian diplomatic compounds in the United States last December after accusing Russia of trying to influence the outcome of the 2016 presidential election.

And last month, the United States added 38 individuals and entities to its sanctions list targeting the Russians and pro-Russian rebels it blames for the fighting in Ukraine.

“Sanctions were not discussed at my meeting with President Putin. Nothing will be done until the Ukrainian & Syrian problems are solved,” said Trump.

Sanctions were not discussed at my meeting with President Putin. Nothing will be done until the Ukrainian & Syrian problems are solved!

The US and Russian sides have issued sharply conflicting accounts of the meeting, with Putin saying on Saturday that Trump had been “satisfied” by his denials of any Russian interference in the polls.

Nikki Haley, the US ambassador to the United Nations, said the Russian denials had been expected but cut no ice.

“This is Russia trying to save face,” she told CNN. “And they can’t. They can’t.

“Everybody knows that Russia meddled in our elections.”