Fazlur Rehman says necess­ary for Pakist­an's stabil­ity that all instit­utions of the countr­y are on the same page
By News Desk
Published: July 31, 2017
Tweet Email 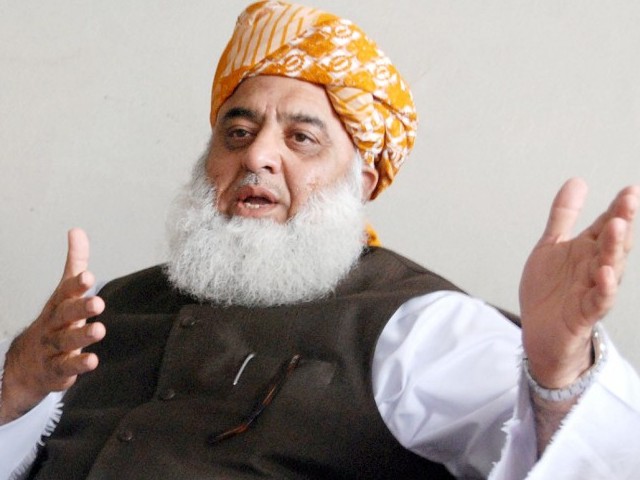 The JUI-F leader was speaking to reporters after a holding a parliamentary meeting of  his party to discuss the August 1 election for the successor of Nawaz Sharif who was disqualified by the Supreme Court on Friday from holding any public office.

Rehman, whose party is an ally of the ruling PML-N, said the JUI-F would support its coalition partner and major major changes in the new cabinet were unlikely.

He said it was necessary for Pakistan’s progress and stability that all institutions of the country were on the same page.

With the opposition parties in the parliament failing to reach a consensus on a joint candidate for the PM’s seat, there are six names in the race for the slot.

The Pakistan Muslim League-Nawaz  has named Shehbaz Sharif as the successor of the ousted prime minister and nominated former petroleum minister Shahid Khaqan Abbasi as an interim premier. Abbasi filed his nomination papers on Monday.

From the Pakistan Tehreek-e-Insaf’s (PTI) side, Sheikh Rashid Ahmed, the Awami Muslim League chief, has submitted his papers.

The Pakistan People’s Party (PPP) has refused to back the PTI candidate and its leaders, Khursheed Shah, the leader of the opposition in the National Assembly, and Naveed Qamar have filed their nomination papers.

Kishwar Zehra and Sahibzada Tariqullah of the Muttahida Qaumi Movement-Pakistan and the Jamaat-e-Islami respectively too are running for the seat.