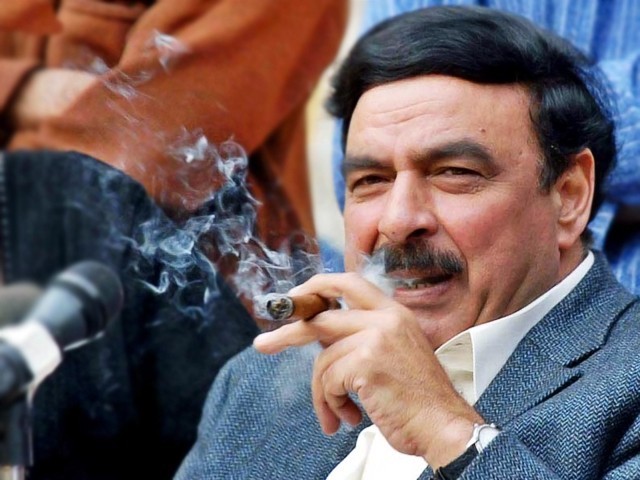 ISLAMABAD: The Pakistan Tehreek-e-Insaf (PTI) has proposed the name of Sheikh Rashid Ahmed, the chief of Awami Muslim League, as opposition candidate in the August 1 election for successor of Nawaz Sharif who was disqualified by the Supreme Court on Friday from holding any public office.

According to the schedule, election for a new leader of the house will take place on August 1 – and President Mamnoon Hussain has summoned a session of the National Assembly for this purpose.

Firstly, Rashid was a petitioner in the Panamagate case and his political struggle against the Sharifs is no secret. Secondly, in view of an overwhelming majority enjoyed by the PML-N in the National Assembly, it would be impossible to win the vote, he added. And thirdly, instead of fielding its own candidate, the PTI wanted to pick someone from a smaller opposition party, so that a consensus among the joint opposition could easily be evolved, he added.

The meeting decided to push the joint opposition to support PTI’s choice, he added. Imran is likely to announce the decision in today’s (Sunday) ‘Thanksgiving Rally’, for which the city administration has already issued a no-objection certificate.

The PTI parliamentary party also voiced reservations over the Pakistan Peoples Party’s (PPP) announcement of fielding its candidate for the coveted slot of prime minister without consulting other opposition parties.

In a tit-for-tat response, the PTI also unilaterally announced its candidate – Dr Yasmeen Rashid – for NA-120, a seat which fell vacant following the disqualification of Sharif, while requesting the joint opposition to support Yasmeen ‘for her unquestionable integrity and social and political struggle’.

Qureshi is expected to hold a meeting with Shah and other opposition  leaders on Monday (tomorrow) at Shah’s chamber in the assembly.

An insider claims that the PTI has already discussed Rashid’s nomination with the Muttahida Qaumi Movement-Pakistan, which has agreed not to oppose the PTI’s decision. The party hopes the Jamaat-e-Islami would also have no objection to the nomination.

Talking to media persons following the PTI parliamentary party meeting, Qureshi said his party would consult the joint opposition in coming days over PPP’s announcement of fielding its candidate for the premiership.

“The PTI wants the joint opposition to select a personality as their candidate for the premiership to develop consensus among the opposition parties,” Qureshi said.

He said the PTI was aware of the fact that PML-N had a clear majority in the lower house of parliament, but still the joint opposition would contest the election for the coveted slot. “We [the joint opposition] will sit together and chalk out a joint strategy,” he added.

Good riddance to the man who tried to get me jailed while I was pregnant: Jemima

Talking about the Panamagate case verdict and Sharif’s speech at the PML-N parliamentary party meeting on Saturday, Qureshi said the Supreme Court’s unanimous decision had endorsed the PTI’s stance on the Panamagate issue.

“Now, the PML-N is trying to create an impression that Sharif had been ousted, not on corruption charges, but mis-declaration of assets, which is incorrect,” he said.

Indeed, he said, the apex court’s judgment consisted of two parts. In the first part, reasons for disqualification had been mentioned which include false declaration of assets, he said, adding that the second part is about corruption and on it all five judges had directed to send corruption references against the Sharif family to NAB.

“If corruption is not an issue, then there is no point in sending references to NAB,” Qureshi said.

On Saturday evening, the PTI chief tweeted, “[It is] shameful how Nawaz Sharif [is] playing [the] victim card with multiple references against him sent to NAB and him being found guilty of lying, forging, perjury etc.”

He also said, “He [Nawaz Sharif] is insulting [the] nation’s intelligence and making mockery of democracy by nominating his brother for PM [post].”