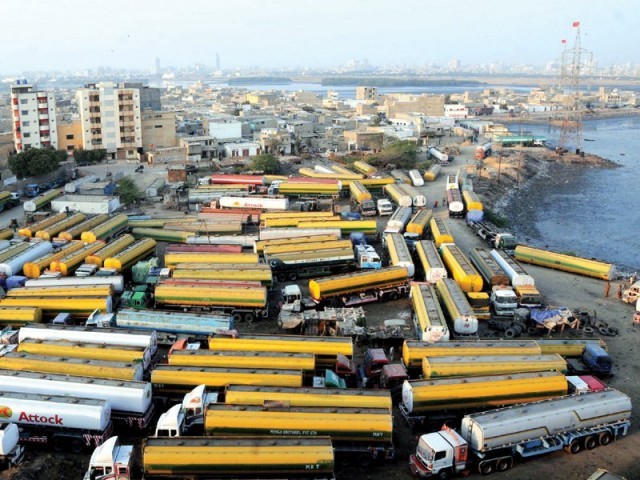 KARACHI: The Supreme Court (SC) appointed on Friday a judicial officer as commissioner to verify the authorities’ claim regarding provision of all required facilities at the Zulfiqarabad Oil Tanker Terminal – a parking facility outside city for oil tankers.

A three-judge bench, headed by Justice Mushir Alam, also directed the commissioner to submit an inspection report by August 3. The bench was hearing a suo motu case against parking of large oil tankers in the residential neighbourhood of Shireen Jinnah Colony in Karachi.

At the outset of the hearing, the provincial home secretary filed a report, informing the bench that all the required facilities, as ordered by the court, had been provided at the Zulfiqarabad Oil Tanker Terminal. The parking facility for the large fuel carrier vehicles was formally inaugurated by the city’s mayor on July 27, he added.

The secretary informed the court that the terminal had parking space for 1,400 tankers.

However, the lawyer representing a shopkeeper of Shireen Jinnah Colony claimed that work on the new terminal had not yet been completed. Therefore, he said the shopkeepers will not shift until construction and other works were completed.

This led the judges to express their displeasure over the shopkeepers’ attitude. Justice Maqbool Baqar, a member of the bench, remarked that such behaviour will not be tolerated. He told the lawyer that the shopkeepers should not threaten to paralyse the system.

The bench members observed that since the authorities were providing required facilities, therefore, all relevant persons, including shopkeepers, will have to shift to the new terminal.

The judges appointed a judicial officer, as a commissioner, to visit the Zulfiqarbad Oil Tanker Terminal to verify the factual position regarding provision of facilities and completion of construction and other works. The commissioner will present inspection report by August 3.

The suo motu proceedings were initiated after a letter was written by Shagufta Bibi, a resident of Shireen Jinnah Colony, seeking removal of the large oil tankers parked in the residential locality. The applicant had complained that the tankers were causing massive traffic jams and great inconvenience to the residents of Block-1.

Ever since the top court initiated suo motu proceedings in 2012, the provincial and local authorities, as well as the oil tankers owners’ association and companies, had been directed, on several occasions, to contribute their respective share to make the new terminal operational to provide relief to the residents of Shireen Jinnah Colony.

Taking up the matter this month, the apex court had directed the provincial government and Karachi Metropolitan Corporation high-ups to submit a report on the current status of construction work at the Zulfiqarabad terminal. Later, they were given a week’s time to provide all required facilities at the terminal, including appropriate arrangements for fire-fighting to cope with any emergency situations.