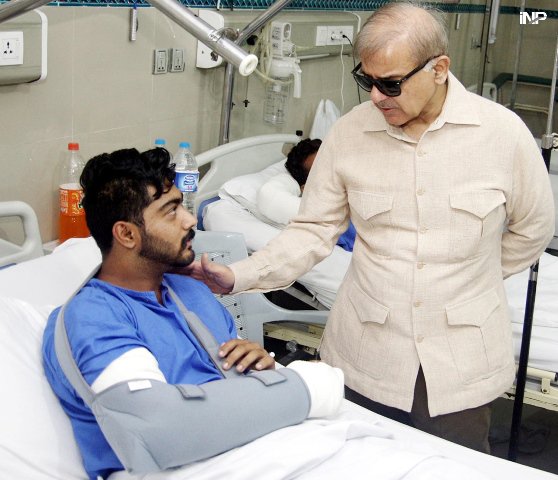 LAHORE: Announcing compensation for the victims of the blast that ripped through Lahore’s vegetable market on Monday, martyring at least 26 – among them nine policemen, Punjab Chief Minister Shehbaz Sharif stated that sacrifices of the martyrs of war against terrorism will not go to waste and Pakistan will emerge as the citadel of peace.

Shehbaz on Tuesday, a day after the blast, announced Rs2 million for the deceased, Rs1 million for critically injured and 300,000 for those with minor injuries.

The chief minister also visited the Ittefaq Hospital, earlier in the day, to enquire after the health of admitted police officials and other persons who sustained injuries in Kot Lakhpat and Sabzi Mandi blast.

“Innocent people and police have been targeted in the tragic incident of terrorism in Lahore yesterday. The coward and barbaric enemies have made a savage attempt which is highly condemnable,” he said.

The chief minister said that Pakistanis are a brave nation who has rendered innumerable sacrifices in the war against terrorism which has no resemblance in the history of the nations.

“The brave officials of Punjab police have showed exemplary performance and fought bravely in this war,” Shehbaz said adding that the tragic incident has saddened every Pakistani and support of the whole nation stands with the family of the victims.

“Enemy of humanity whose hands are stained with the blood of innocent Pakistanis will meet their logical end and the nation will surely take revenge of the blood of its martyrs. The nation salutes the great sacrifices of its brave sons.

Shehbaz said that the will of the brave nation which has rendered immortal sacrifices in the war against terrorism cannot be shattered.

He visited different wards and enquired after the health of police officials and other injured persons.

The chief minister directed the hospital administration to provide best treatment facilities to the injured and they should be given best healthcare facilities so that the patients could be completely recovered.

Shehbaz comforted the heirs and assured them that no stone will be left unturned in the treatment of their loved ones and he would personally monitor the provision of healthcare facilities to the injured in the hospital.

He appreciated the performance of doctors, surgeons, nurses and the paramedical staff in Ittefaq Hospital and other medical institutions for fully taking care of the injured and said that he is thankful to all of them.