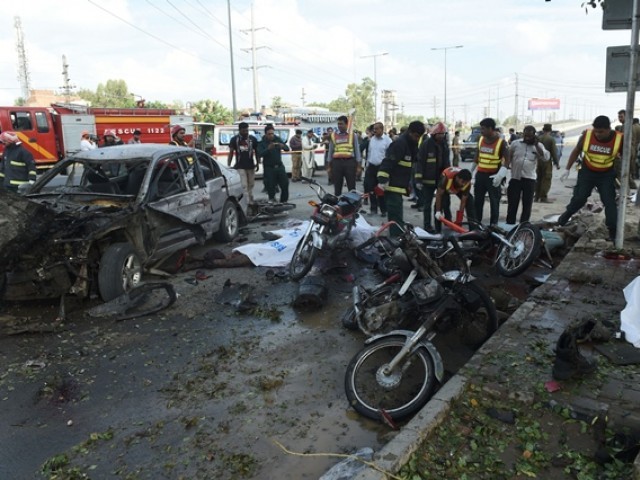 LAHORE: At least 26 people – among them nine policemen – were martyred on Monday when a suicide bomber detonated the explosives he was carrying at a busy vegetable market in an attack that broke a brief lull in terrorist violence in the country’s second-largest city.

Dozens of people were also wounded in the attack claimed by the outlawed Tehreek-e-Taliban Pakistan, the umbrella of terror groups blamed for most violence in the country. The deadly bombing came days after the military mounted a major offensive, codenamed Khyber-IV, to deny Afghanistan-based terrorists a transit route in the Rajgal Valley of Khyber Agency.

Officials said the explosion took place at 4 in the evening during peak hours on Ferozpur Road that cuts through the city, where people were standing at a bus stop while police were clearing street vendors from the area. 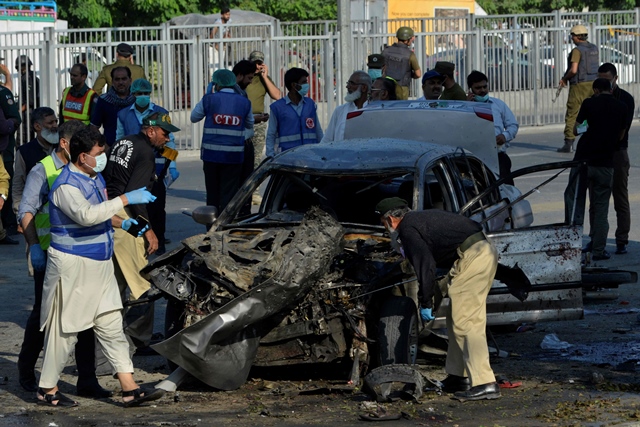 Rescuers shifted the casualties to hospitals and a heavy contingent of police cordoned off the bomb site as paramilitary Rangers also arrived at the scene.

Three motorcycles and a vehicle could be seen damaged at the crime scene.

Initial investigations suggest the suicide bomber riding a motorcycle detonated the explosives strapped to his body. The sound of explosion was heard in a radius of several kilometres.

“I heard a big bang and felt like the land was shaking,” said Abdul Basit, a nine-year-old boy. “I immediately rushed to the site, where people were crying for help,” he added.

DIG (operations) Dr Haider Ashraf also confirmed it was a suicide attack. “At least 26 people are martyred while 62 others injured.”

“Personnel of law-enforcement agencies are specifically targeted,” said the DIG.

He said Lahore was a prime target of terrorists and because of that law-enforcement agencies were extra vigilant.

“They chose a very soft target,” he said, vowing, “We will not let these terrorists go [scot-free].” 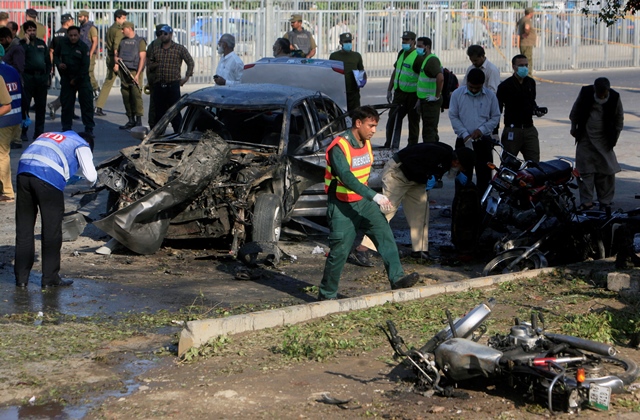 He said the investigation process has already been initiated and body parts of the suspected attacker have been sent for chemical examination. “The bomber seems to be not more than 16 to 18 years old.”

According to the bomb disposal squad, around 10-12kg of explosive material was used in the suicide hit which also contained ball-bearings and shrapnel.

The area is the heart of the city where thousands of people pass through the busy Ferozpur Road during peak hours. At the site of the blast, an old sabzi mandi (fruit and vegetable market) is located where the Lahore Development Authority (LDA) was busy conducting a full-day anti-encroachment drive.

Due to fear of resistance by street vendors, a large contingent of police was deployed to meet any untoward situation.

According to the hospitals, nine people were brought dead.

After the attack, police, Counter-Terrorism Department (CTD) and sensitive agencies launched a search operation in nearby localities and arrested several suspects while checking the identity of people through biometric machines.

The CTD was investigating the matter from different angles. They have collected call data records of suspicious phones after geo-fencing. They are also collecting CCTV footage of nearby areas to locate the bomber, his hideout and the route he used to reach the spot.

An official of the CTD told The Express Tribune: “The modus operandi of the attacker and the location suggest that the attacker has not acted alone.”

“He must be staying there for quite some time and we must find out his collaborators and deal with them with an iron hand.” The CTD also registered a case on the complaint of Inspector Abid Baig.

Prime Minister Nawaz Sharif and Punjab Chief Minister Shehbaz Sharif condemned the grisly assault and expressed deep sense of sorrow and grief over the martyrdom of policemen and passers-by in the blast. The chief minister also sought a report from the acting IG Police and ordered to investigate the incident.

(With additional reporting by Imran Adnan)