Lahore blast victims call for attack masterminds to be hanged

Lahore blast victims call for attack masterminds to be hanged 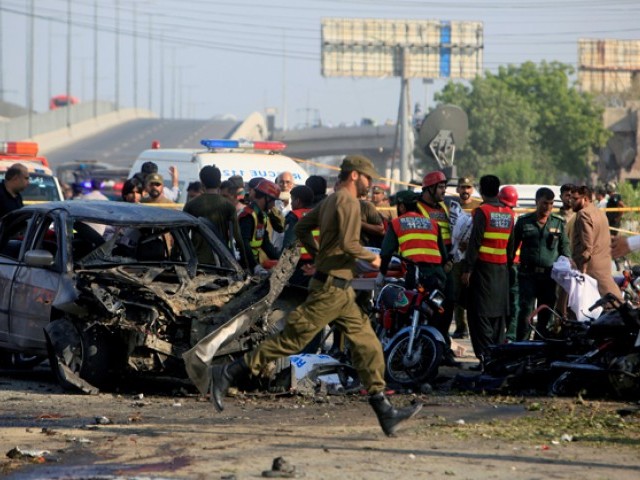 LAHORE: Anger was growing in the country on Tuesday as the grief-stricken relatives of 26 people killed by a suicide bomber in Lahore a day earlier buried their loved ones and demanded the government publicly hang the masterminds of the attack.

Families and residents in the bustling eastern city demanded action as they attended funeral prayers, and as the chief minister of Punjab province Shehbaz Sharif visited survivors in hospital.

“We demand from the Government of Pakistan that those who are involved in this incident and those who are the facilitators should be hanged in public,” Hafiz Naseer ul Din, uncle of a policeman killed in the blast, told AFP.

“We came here in great grief,” added Shaikh Rizwan, a local resident who attended the funeral prayers for some of the victims.

“Twenty-six people were martyred here yesterday, I request my government that please uproot these terrorists fully so our country can progress,” he said.

The powerful blast Monday hit a busy vegetable market on a bustling main road in Lahore, blowing out the windows in nearby buildings.

Many of those killed in the attack were police who were clearing shopping stalls that had illegally encroached on to the road.

On Tuesday distraught relatives carried the coffins of two policemen, brothers who were killed in the attack, to a petrol pump which had been turned into a makeshift prayer ground.

Floral wreaths from local police chiefs were placed on the wooden coffins as family members wept.

Police have said their initial investigations show the attack, claimed by the Taliban, was carried out by a suicide bomber.

Forensic experts were collecting evidence from the site of the blast Tuesday, an AFP video reporter saw.

Lahore has been hit by significant militant attacks in more than decade-long war on extremism, but they have been less frequent in recent years.

The last major blast in the city was in March last year, when 75 were killed and hundreds injured in a bomb targeting Christians celebrating Easter Sunday in a park.

But the country was also hit by a wave of attacks in February this year, including a bomb that killed 14 people in Lahore.

In April a further seven were killed in an attack in the city targeting a team that was carrying out the country’s long overdue census.

After years of spiralling insecurity, Pakistan Army launched a crackdown on militancy in the wake of a brutal attack on a school in late 2014 in which more than 150 people, mostly children, were killed.