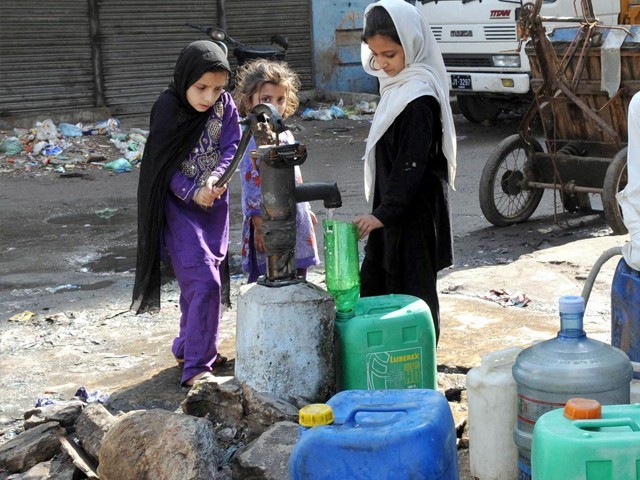 HYDERABAD: A multi-drug resistant typhoid (MDRT) outbreak that has gripped parts of Hyderabad continues to infect more people as authorities fail to contain the source of the bacterial infection. One death and over 250 cases of MDRT, whose patients do not respond to conventional medication, have been detected in the last eight months predominantly from parts of Latifabad and Qasimabad talukas in Hyderabad.

Around 75% of the patients were children of less than 10 years of age. “We still receive five or more cases every week,” Dr Farah Qamar, consultant infectious diseases and assistant professor of paediatrics at Aga Khan University Hospital (AKUH), Karachi, told The Express Tribune.

The first case of MDRT was detected at the AKUH’s blood lab in Hyderabad in November, 2016. Since then, Dr Qamar says she has closely monitored the epidemic, which she believes has infected a higher number of people than what is known.

According to her, AKUH’s data collection of MDRT patients is limited to the hospital’s labs in Hyderabad and a centre the AKUH has opened at Government Bhitai Hospital in Latifabad. “We don’t know how many cases have surfaced during the corresponding period at Liaquat University Hospital’s Hyderabad and Jamshoro branches as well as the other government and private hospitals.”

Liaquat University Hospital is reportedly not sharing data with the AKUH as well as with the district health authorities. The medical superintendent of the hospital could not be contacted for his version. Dr Ahmed Haider, a district health officer in Hyderabad, believed that the hospital is able to diagnose the MDRT strain at its own lab and cure them as well.

He claimed that all the government health facilities, including taluka hospitals and government health centres, which fall under his jurisdiction, are sharing details of every suspicious and diagnosed case of MDRT with AKUH. Liaquat University Hospital functions independent of the district health authority.

Dr Haider disputed AKUH’s figure of 250 cases. “We have details of only around 160 cases,” he claimed.

The symptoms of MDRT such as fever, headaches, coughs, abdominal pain and malaise, among others, are similar to those of ordinary typhoid. Initially, doctors in Hyderabad used to diagnose a MDRT patient when common medication failed to cure the disease.

Now, after several training sessions conducted by Dr Qamar for local paediatricians, many doctors opt for the blood culture evaluation before embarking upon the treatment procedure. “We are prescribing a combination of antibiotics and vaccinations that are expensive and stronger than the old treatment. A patient normally recovers in around two weeks,” said the doctor.

However, she was curious to evaluate the recovered patients six months after their successful treatment. “We want to assess whether MDRT is resurgent or not,” she explained.

According to Dr Haider, the patients cured at government health facilities completely recovered in around two weeks. “The one reported death is a disputed case and that too of a nine-year-old girl from Naushero Feroz district who was brought in a serious condition to Hyderabad.”

Although empirical research to ascertain the source of this typhoid has yet to be conducted, health practitioners are convinced that faecal contamination in water is causing this illness. “We went door to door in parts of Latifabad and Qasimabad [where the MDRT cases emerged] to tell people about the outbreak and the precautionary measures they need to adopt. During the campaign we observed that the drinking water supplied to these localities was not chlorinated also contained sewage mix due to the damaged supply system,” Dr Qamar said.

Dr Haider and other local paediatricians also pointed to the same water contamination problem, which has is not only causing MDRT but also resistant tuberculosis in children.

During the last few months health authorities have held repeated meetings with the officials of the Water and Sanitation Agency (Wasa) to seek their help in containing the epidemic. However, the maximum cooperation they have received has been in the form of assurance that chlorination is being regularly maintained in the district’s largest filtration plant on Jamshoro Road.

But the four other filtration plants in City and Latifabad talukas continue to supply raw water because these plants require hundreds of millions of rupees for rehabilitation before they become operational. Municipal and industrial effluent water is released untreated in the river and canals and that contaminated water is then supplied to the residents of Hyderabad through these plants.

On the order of the Supreme Court’s judicial commission on water and sanitation, Wasa has started chlorination at only one of its plants.

Asad Ali Laghari, a researcher at the US-Pakistan Centre for Advanced Studies in Water at Mehran University of Engineering and Technology, in his study found several antibiotic resistant bacteria in the water of Hyderabad and Jamshoro. He applied 16 commonly prescribed antibiotics on the microbes collected in 61 tap water, subsoil, river and canal water samples. The worrying results showed that many bacteria resisted up to 12 of these antibiotics.

Doctors also cite self-medication and a tendency of taking antibiotics for the rapid recovery as other reasons for the bacterial resistance.

CM claims progress in education in the province