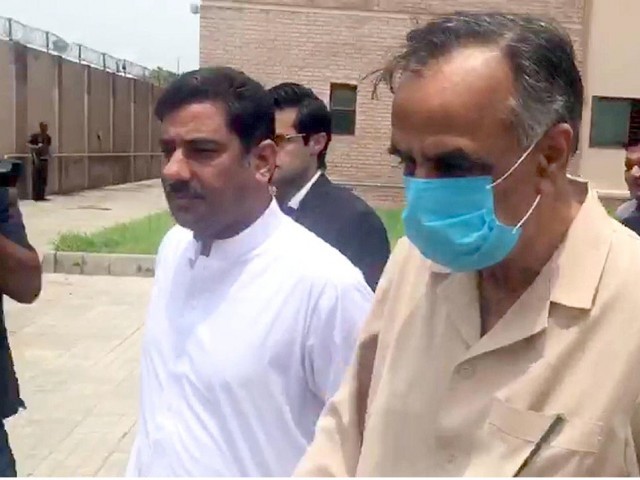 ISLAMABAD: The Securities and Exchange Commission of Pakistan (SECP) chairman, Zafar Hijazi, was arrested on Friday after a special court dismissed his interim pre-arrest bail application in a case pertaining to tampering with records of the companies owned by the Sharif family.

The Federal Investigation Agency (FIA) took Hijazi into custody from the premises of the Special Court Central, where he had appeared for the confirmation of his pre-arrest bail.

The Joint Investigation Team (JIT) – which had probed into the Sharif family’s offshore assets in line with the apex court’s April 20 verdict in the Panamagate case – alleged that the SECP chairman tampered with records of the Sharif’s sugar mills.

Subsequently, the FIA launched an investigation into the allegations on the directives of the Supreme Court, and later endorsed JIT’s claim.

On July 10, FIA’s Special Investigation Unit (SIU) lodged an FIR against him under Sections 466 and 471 of PPC read with 5(2)47, the Prevention of Corruption Act.

When the court took up the case, the counsel for Hijazi argued that the allegations levelled against his client were false and he had never pressured any SECP official to tamper with the records, adding that the officials had done so on their own and had falsely accused Hijazi.

He argued that the FIA did not arrest the officials who were directly involved in the case but booked Hijazi who is not even a co-accused in the matter.

The counsel for the FIA, however, opposed the bail application saying no mala fide was involved and the case was registered on the basis of evidence following an inquiry into the case. After the arguments, the court dismissed his bail plea.

Stance in the petition filed before IHC

In the petition, Hijazi through his counsel Shiekh Zameer Hussain said the FIA had not proceeded in the matter as it ought to have, adding that Hijazi led the life of an honest and upright man without any blemish; yet his prestige and dignity had been put at stake.

In 2011, the petitioner said, a case was initiated in the SECP to probe into affairs of Chaudhary Sugar Mills (Pvt) Ltd qua the money laundering suspected to be used as a medium to launder the outcome by concealed and fraudulent activity in the disguise of regular and legitimate business activity.

The Central Authorities in UK and Financial Services Authorities were approached for requisite information, the counsel said, and a clarification letter was issued to the company in 2011 and proceedings under sections 261 and 263 of the Companies Ordinance were also initiated.

He maintained that two files were maintained — money laundering file and the routine examination file — and the company provided detailed information and documents through its reply in 2012 and 2013 which were found satisfactory.

The counsel said the FIA did not bother to look into the money laundering file and took the advantage of discrepancy, attributed to the petitioner with mala fide intent as the date mentioned in the routine examination file was nothing but an error which has been wrongly attributed to petitioner.

Hussain said that all three officers — Abid Hussain, Ali Azeem Akram and Maheen Fatima — of the SECP agreed on the point that the issue was closed in 2013 and yet it is alleged that Hijazi pressurised them in 2016 to ante date note as 14.1.2013. “The officers of FIA have failed to explain or examine what benefit the petitioner would derive from such oral order,” he stated.

The counsel argued that the record could have been rectified with a simple note to the effect that although the main file was closed in 2013 but due to sheer inadvertence no order was passed in the routine file and that the omission is being rectified. But such a note, he added, would have adversely affected the three officers for their inefficiency and negligence.

“In order to save their skin they blamed the petitioner for pressurising as they slept over the files without proceeding further for more than three years,” he alleged. In addition, they blamed Hijazi to cover their illegal acts and omissions.

The counsel further argued that the officers, highly educated and having sufficient time, did not report the matter to the higher authorities in the federal government. There is no evidence on record to constitute any of the offences and yet the FIA has registered the case.

Finally, Hussain argued that Hijazi is an old man — 64 years old — who had a kidney transplanted in 2001, has developed diabetes mellitus type-2, needs specialised medicine and his detention in jail environment would be injurious and a danger to his life.

He requested the court to grant pre-arrest bail till the final decision of trial. The court, however, granted him transitory bail till July 17 with directions to appear before the relevant court.