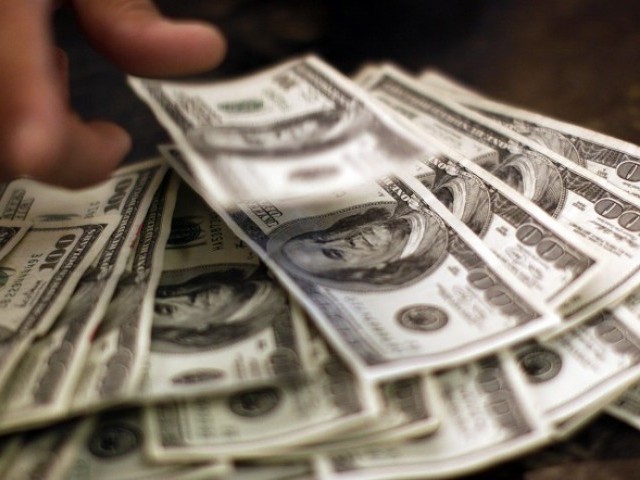 ISLAMABAD: A Senate panel on Wednesday questioned the government’s strategy of taking new loans that has caused an exponential increase in borrowings as the cost of external debt servicing mounted to $4.8 billion in 11 months, which has almost doubled in the past four years.

From July through May of 2016-17, Pakistan spent $4.794 billion on repaying external loans and the interest on them, according to the Ministry of Finance.

This includes $3.6 billion in principal loan repayments and another $1.2 billion in interest payment. The figure is expected to cross $5 billion once the full fiscal year data is available.

The Ministry of Finance shared the data for 11 months of the last fiscal year that ended on June 30 with the Senate Standing Committee on Finance.

However, the ministry did not provide a complete picture to the parliamentary panel and also ducked questions on interest payment on short-term foreign borrowings.

Finance Secretary Shahid Mahmood requested an in-camera meeting to share details of the borrowings, although these figures are already publicly available in the Ministry of Finance’s own publications.

Commercial banks could make a cartel if details of foreign commercial borrowings were made public, said Mahmood. 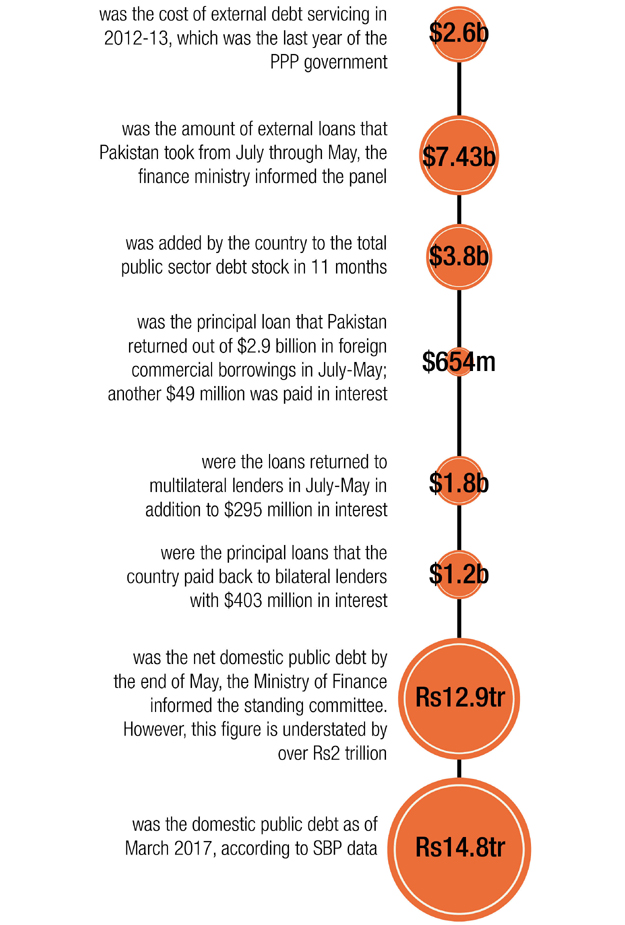 The government was borrowing more to repay the previous debt, which could create serious problems for the economy, said Mandviwalla, who was finance minister in the PPP government.

The finance ministry informed the panel that Pakistan took $7.43 billion in external loans from July through May, out of which $3.6 billion was consumed to retire previous loans. The country added $3.8 billion to the total public sector debt stock.

Out of $2.9 billion in foreign commercial borrowings in July-May, Pakistan returned $654 million worth of principal loan and another $49 million was paid in interest. The country returned $1.8 billion to multilateral lenders in addition to $295 million in interest cost.

Similarly, bilateral lenders were paid back $1.2 billion in principal loans and $403 million in interest.

The senators expressed concern over the double-digit growth in public debt, although Director General Debt Office Ehtishaam Ahmad tried to downplay it by citing numbers that did not reflect the complete picture.

The finance ministry shared the net public debt figure with the standing committee – a new term coined to understate the worsening debt position. In the 2017-18 budget, the government has changed the public debt definition through Money Bill.

The net public debt is defined as the stock of debt minus deposits of the federal government, provinces and other entities. The Ministry of Finance informed the standing committee that the net domestic public debt increased to Rs12.956 trillion by the end of May.

However, this figure is understated by over Rs2 trillion as actual domestic public debt, excluding the debt owned by public sector enterprises, was close to Rs15 trillion. The SBP data showed that the domestic public debt was Rs14.8 trillion in March 2017.  Even at Rs12.956 trillion, there was an increase of Rs1.2 trillion or 10.1% in the net domestic debt in just 11 months.

The finance ministry did not share a plan about how it will contain the debt. The only thing that the finance secretary said was that the Federal Board of Revenue should improve its tax collection.

He also mentioned the declining foreign remittances that stood at $19.3 billion by the end of last fiscal year, but the committee did not agree with his arguments on remittances.