Qandeel Baloch is a martyr and so are other honour-killing victims: Mufti Qavi

Qandeel Baloch is a martyr and so are other honour-killing victims: Mufti Qavi 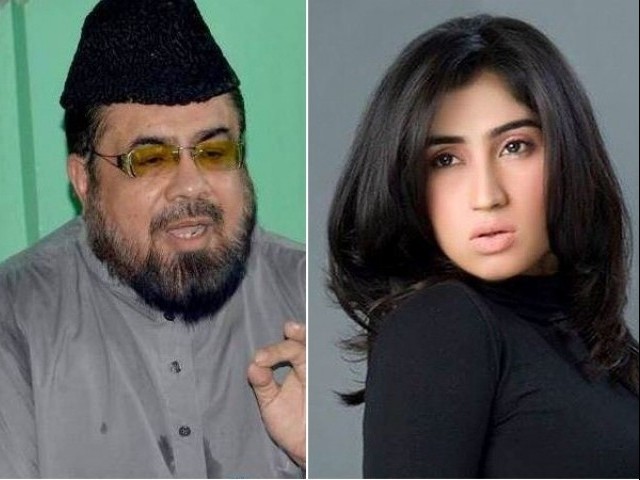 MULTAN: A year after popular social media star Qandeel Baloch’s death, Mufti Abdul Qavi, dubbed ‘selfie cleric’ after he appeared in pictures with her, has said Baloch and all other honour-killing victims were martyrs.

Addressing journalists in Multan on Wednesday, Qavi, whose selfies with the rising starlet went viral last year drawing ire from various circles and costing him his membership in various prominent religious councils, said taking someone’s life in the name of honour was illegal and not permitted in Islam.

The cleric further said that he was writing a journal on honour killings in which he will cite references from the Holy Quran and the sayings of the Holy Prophet (PBUH) against the appalling custom.

Qavi said police investigating Baloch’s death had contacted him in the past few days for further interrogation. “Earlier I was interrogated for three hours and all of that was recorded on video,” he added.

The cleric claimed that foreign forces were hatching conspiracies against him because the “West is the enemy of Islam”.

“They want to declare me Qandeel Baloch’s killer in their hatred against Islam,” he claimed. “The international media are trying to establish me as her killer.”

He further said 19 foreign publications interviewed him after Baloch’s murder. “A female reporter of the BBC has reported fake news on the death anniversary of Qandeel Baloch which was nothing but propaganda and a conspiracy against me,” he maintained.

“I haven’t killed her and have already declared that killing an innocent person in the name of honour killing is illegitimate in Islam.”

The cleric further said that he was not in contact with Baloch’s brother who had confessed to drugging and strangling her last year for bringing a ‘bad name’ to the family with her social media posts.

Qavi said police had already checked all the data in his phone, including the last 5,000 phone calls. “My name is not in the FIR registered for Qandeel’s murder, but I will present myself to the police whenever they call me for more information,” he added.

The cleric claimed that it had been a year since the social media star had died but some of the suspects in the case had been released on bail.
“As per the law, I should not be investigated again, but a lawyer named Safdar Shah wants to drag me into the case,” he claimed. “However, lawyers and the laws in Pakistan, all are with me.”