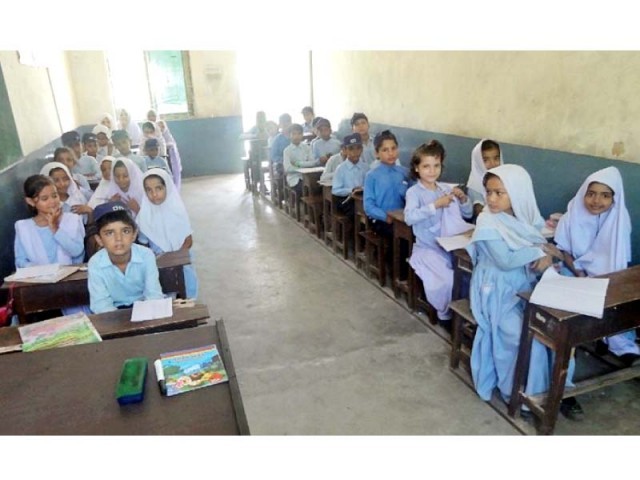 Students take class in a school in Faisalabad. PHOTO: EXPRESS

FAISALABAD: In an astonishing revelation, the administration and heads of primary, middle and secondary schools across Faisalabad District have been found involved in furnishing fake enrolment numbers to the education department, thus misleading the officials by their false claims of achieving the targets set by the government.

As per the documents and information available with The Express Tribune, the heads of schools of the district from Grade-1 to Grade-12 were given the task by the provincial education department to ensure 98% enrolment of students in their respective schools by May 31, 2017.

Ex-VC among 10 indicted in enrolment scam

As per the target, as many as 2,300 school heads were required to achieve the total strength of 862,253 children in their respective institutions. The headmasters of these schools were further asked to submit complete lists of enrolled schools and students by the given deadline.

However, the reports submitted by the school heads revealed that the strength of the schools in Faisalabad District is 849,428 and they achieved 98.6% target that is in line with the actual target assigned to them.

During compilation of the reports by the local education officials, it transpired that the statements of enrolment contained the figures of ‘ghost students’.

While taking notice of the findings, the local education department approached the National Database and Registration Authority (Nadra) and gave them the task of verification of enrolment statements on the basis of the CNIC numbers of the parents of the enrolled students.

During scanning of the data, the officials disclosed that over 72,000 entries were either fake or wrong and do not match with the original record of Nadra. Therefore, the data could not be verified.

When contacted, Education CEO Javed Iqbal Chishti told The Express Tribune, “We have full strength in district schools as per the target but we are short of enrolment in Grade-9 and some other classes due to technical reasons.”

He added in Grade-8, almost 10% students failed to clear the examination which is the main reason of decline in enrolment in Grade-9.

The education CEO claimed, “We have achieved the target of enrolment campaign by almost 81% and hopefully the remaining target would be achieved shortly.”

Chishti maintained, “In Grade-1, the education department achieved 16% more than the actual target in the district although the target assigned was the highest in the whole province.” 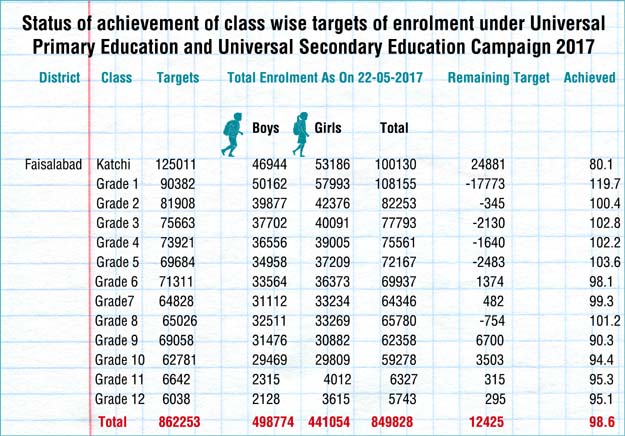 To a question about ghost students’ enrolment, he pointed out, “There are some fake entries and we are taking action against those who are responsible for such acts.” He said that anomalies found during verification emerged on the basis of some different entries in the record of the education department and Nadra.”

The education official elaborated that at the time of admission, some entries of ID cards, names, addresses and other particulars were not properly recorded so we could not confirm that the name of the students, which were not verified from Nadra, were ghost students.

“However, we are making efforts to correct all such anomalies and I have directed the school heads to correct the record of the enrollments within two weeks,” he remarked.