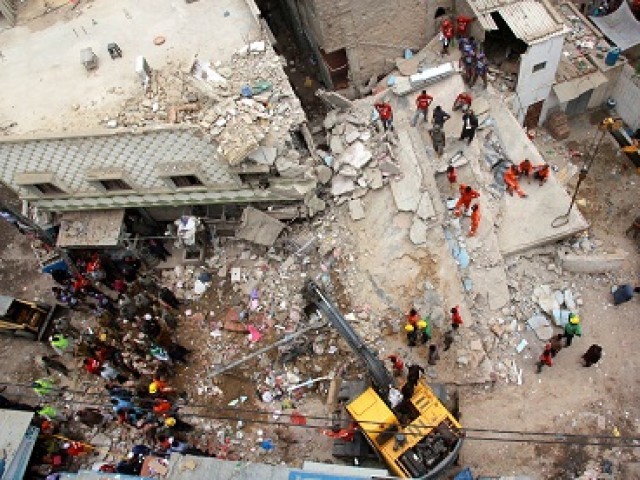 Under the rubble: An inquiry committee formed by SBCA will compile a report on the incident within 15 days. PHOTO: ATHAR KHAN/ EXPRESS

KARACHI: A father, son and a woman were among at least five people who lost their lives while thirteen others trapped under the debris were rescued when a multi-storey residential building collapsed on Tuesday in a congested Liaquatabad neighbourhood.

The three-storey building, housing apartments and a hotel on the ground floor, was located at the popular Sarya Gali in Liaquatabad No 9.The building ‘suddenly’ collapsed at around 2:25am with a loud bang.

“It seemed as if someone fired a missile on our building as the building collapsed with a loud bang,” said an injured tenant, Safdar.

“The rescuers were providing us with oxygen otherwise it would have been very difficult to survive for at least two hours under the debris,” he said.

Over two dozen occupants were present at the building when the incident occurred. However, some of the occupants were immediately rescued as area people immediately gathered at the spot to help rescue them before the arrival of the rescuers from different departments.

Later, heavy machinery was also called at the site to help in the rescue operation but the rescuers worked manually. “Using heavy machinery in the initial stage could be more dangerous as more lives could be lost,” said Karachi Deputy Mayor Arshad Vohra while visiting the site.

“We used the cutters to rescue the people trapped under the debris and we were successful in doing so,” Vohra said.

The almost 25-year-old building was constructed in violation of the city’s building rules and regulations. Karachi Mayor Wasim Akhtar blamed the Sindh Building Control Authority (SBCA) and termed the building as ‘illegal’.

“Builders are constructing four-storey buildings in the area despite having permission for a ground-plus-two-storey,” explained Akhtar. “[The] SBCA chief should be asked how multi-storey residential buildings are being constructed in the area,” Akhtar said.

Residents of 354 unsafe buildings in Karachi given eviction notices

“Rescue officials were avoiding the use of heavy machinery keeping in view the possible presence of more survivors in the debris,” Mustafa said.

All machinery required for the rescue operation was present at the building collapse site, he said, adding that it could take up to 24 hours to remove the debris after an incident of this nature.

SBCA officials said that the building collapsed due to its dilapidated structure. “It was a ground-plus-one-storey building while the second floor was temporarily constructed,” said SBCA Dangerous Buildings Director Ashkar Dawar.

“The building collapsed due to its old structure and its base also deteriorated due to the seepage of sewerage and rain water,” Dawar claimed.

According to the residents of the area, the building’s foundation was weakened due to stagnant water from the sewage that remained in the street almost all the time. The situation worsened because of the rains, they said.

“One could see the crumbling walls and a side of the building slightly buried in the ground,” Mobin Baig, a resident of the adjacent street, told The Express Tribune.

Another resident, Fakharuddin Salim, said that the incident was bound to happen. “In all of Liaquatabad, you cannot build a house more than two storeys, but see the buildings around this ill-fated house,” he said, questioning the failure of authorities to check illegal constructions.