The man was carryi­ng pages with him which he descri­bed as his compla­int
By Our. Correspondents
Published: July 17, 2017
Tweet Email 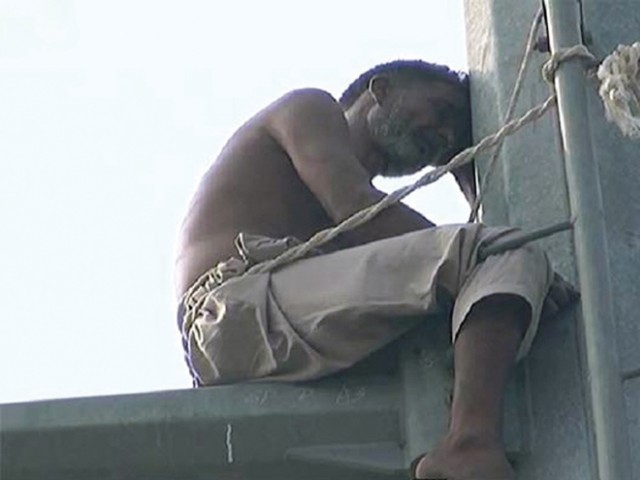 A rescue team used a fire engine to rescue the man. photo: NNI

LAHORE: The climax of the story of a man who climbed an electric pole to register his protest against the political scenario in Pakistan came as the police disclosed the man was mentally unstable.

Amin, who was initially taken as a rikshaw driver and the reason behind his climbing the electric pole was thought to be an ‘unfair challan by city traffic police’, had a different story to tell. The man had climbed up the electric pole in the morning in Naseerabad police limits, near Model Town Katchery and succeeded in immediately catching the attention of media persons, police, rescue teams and a huge number of people who gathered at the spot. SP Model Town Ismail Kharak also reached the site and tried to convince Amin to come down but the man remained there for over two hours until he was brought down by a rescue team using a fire engine.

Murree Road blocked for over an hour due to YDA protest

The rest of the statement was also filled with meaningless conversation. The statement did not carry any complaint against city traffic police and there was no mention of challan.

SP Asif said in the morning at around 7:00am police received a call at traffic control that a man had climbed up an electric pole to protest against an ‘unjust challan’ by the traffic police. The incident was brought into notice of Chief Traffic Officer Rai Ijaz Ahmad who ordered to rescue the man. Amin told police that he was protesting against country’s worsening political condition. DSP Model Town Nazar Abbass said they would conduct Amin’s medical examination to ascertain whether he was mentally ill or not.

Conspiracy being hatched against Pakistan: Bizenjo