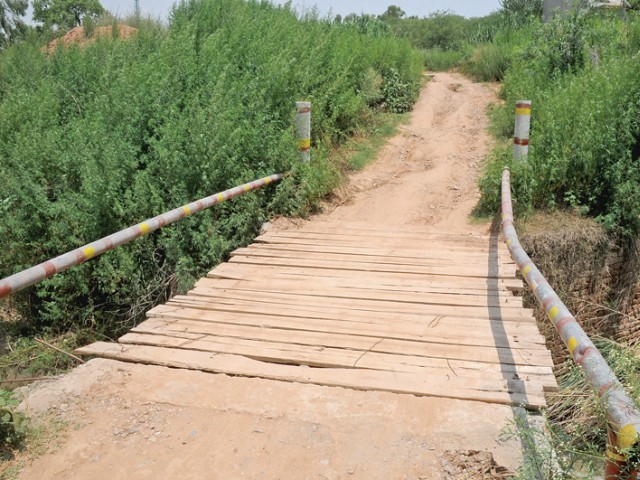 The broken, precarious bridge in the park while Chinkara deer have little water on hot days. A broken fence to keep peacocks in. PHOTOs: AGHA MEHROZE/EXPRESS

RAWALPINDI: Officials at the Lohi Bher Safari Park have taken the unprecedented step of caging up the lions for fear they may become a victim to rampant land grab.

The wildlife and safari park had been set up 25 years ago in the twin cities. Conceived in 1988 and opened in 1992, the park boasted massive enclosures sprawling over 1,050 acres of forest land.

But over the years, the park has fallen into disrepair. Moreover, there was a free-for-all over the park’s land, which has seen its estate shrink to just 450 acres.

Tigers and lions at the park, who once prowled the lush green lands, have been confined to their cages for fear that the weak and broken fences may allow them to escape and terrorise residents of adjoining areas.

Furthermore, birds and other animals in the park appear to be weak from inadequate food and care.

A waterhole which provided animals with drinking water has dried up. A sizeable lake was also planned to have been built where visitors would have gone on boat rides – but the site now stands barren, bereft of any water and populated with tall grass. The park currently has three lions, antelopes, black buck, peacocks among other animals.

The once sprawling park, which offered entertainment to residents of the twin cities, is now a picture of ruin.

Pathways in the park are broken and appear more as trails than paths. A bridge in the park too has broken down, making the journey across it precarious.

The infrastructure is so poor that the main road off the Expressway and leading up to the park has become impassable for cars and motorbikes.

As if that was not enough, people living around the park have broken through its fences and forged paths of their own which cut across the park.

All of this has driven visitors away from the park, the dip in revenue deeply impacting the park. Wildlife Park Assistant Director Irfan Farooqi said that around 200 acres of the park’s land had been reassigned to the Media Town. Another 200 acres were transferred to the RDA. Further, around 165 acres of park land was encroached by housing societies while a further 35 acres have also been forcibly occupied.

He added that during the Eid holidays, they had to call in the police to foil the latest land grabbing attempt by a nearby housing society.

Farooqi said that the Lohi Bher and Airport police stations, along with the finance departments of Islamabad and Rawalpindi were now demarcating the park’s land on orders from the Supreme Court.

Park official Dr Wasif Majeed maintained that animals at the park were being fed within the available resources.

He, however, conceded that the facility’s infrastructure was badly in need of an upgrade to bring visitors back and restore the lost lustre of the park.