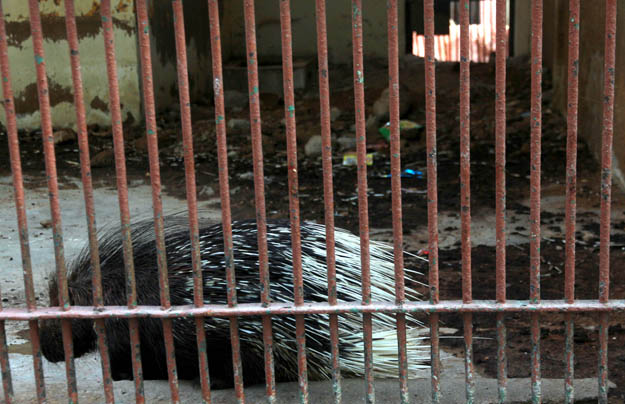 Many of the cages are filled with trash and animal refuse. PHOTO: ATHAR KHAN/EXPRESS

KARACHI: Monkeys sightlessly gaze into the distance, listlessly hanging from the bars of their cages. Their lethargic behaviour depicts the untold story of their suffering at one of the city’s most famous zoos. The usually hyperactive animals seem depressed to be confined in this concrete jail.

This seems to be the story of every animal at the Landhi-Korangi Zoo, which needs the urgent attention of the authorities. Even visitors have also expressed dissatisfaction over the maintenance of the zoo. The concrete animal enclosures look more like prison cells and the stench emanating from the cages is so strong that visitors can barely stand near them. 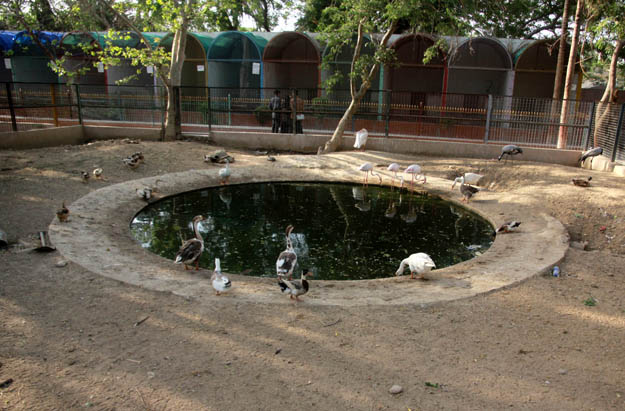 Many animals at the zoo are living in filth but zoo officials claim everything is fine. PHOTO: ATHAR KHAN/EXPRESS

Since its establishment in 1998, the zoo has been given to a private contractor, Zahid Qureshi, who looks after its maintenance. According to his son, Jehangir Zahid, who is also the incharge of the zoo, it is operating in an ‘ideal condition’ and everything is fine.

Jehangir said he wants more animals, whose arrival he expects from the Karachi Zoo after the renovation work will be started in the latter’s cages. He claimed that some of the animals ‘like to live in a dilapidated environment’ and said these animals ripped the floor out of their cages themselves.

He said a few months ago, a pair of pumas was shifted to the zoo. However, he did not disclose the recent deaths of a blue bull and lioness, which The Express Tribune learned about from a zoo staffer. Other animals at the zoo were five brown deer, two white deer, three blue bulls, two pairs of monkeys and a pair of crocodiles. 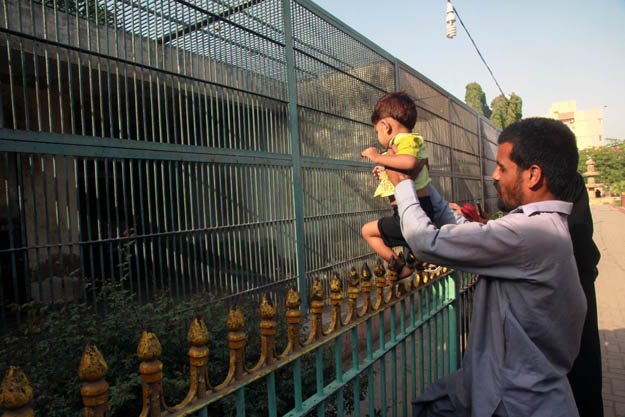 Despite the poor maintenance and terrible condition of the zoo, people still visit it, as there are few other recreational activities in the area. PHOTO: ATHAR KHAN/EXPRESS

Recently, the Sindh government allotted Rs300 million for the renovation of the Karachi Zoo but not a single penny was given to the other zoos in the city.

At the Landhi-Korangi Zoo, most of the animals in the cages were without any identification plates. The cages were littered with garbage but the enclosures were largely barren, with only a few animals living there. A zoo staffer, on the basis of anonymity, also said that there is no veterinarian posted at the zoo and when the need for one arises, a veterinarian is summoned and arrives several days later, which severely affects the condition of the animals. 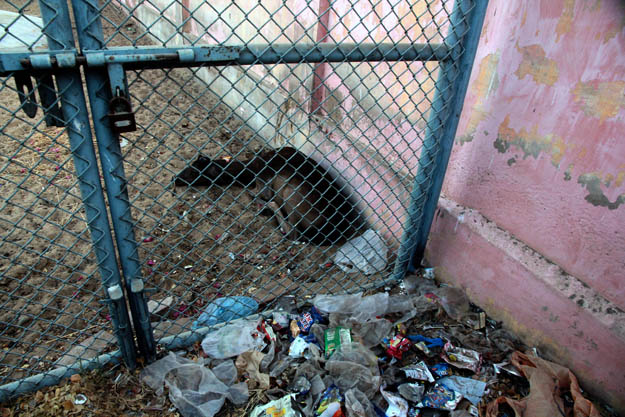 This animal lies in the mud listlessly. Visitors complain that the zoo resembles an animal graveyard. PHOTO: ATHAR KHAN/EXPRESS

Though families continue to visit the zoo, as it is the only source of entertainment in the locality, they expressed anger over the lack of maintenance. Mrs Daniyal, who visited the zoo with her children, said it resembles a graveyard, as the animals all look ill or listless. According to her, leftover food and animal waste lies in the cages for days, creating a stench so foul that visitors can barely bear to stand near the cages, let alone view the animals.

City’s troubled animals welcome all to their impressive castle

The only attractive place at the zoo was an indoor aquarium built in 2012. The aquarium, which was home to various species of fish, received many visitors. 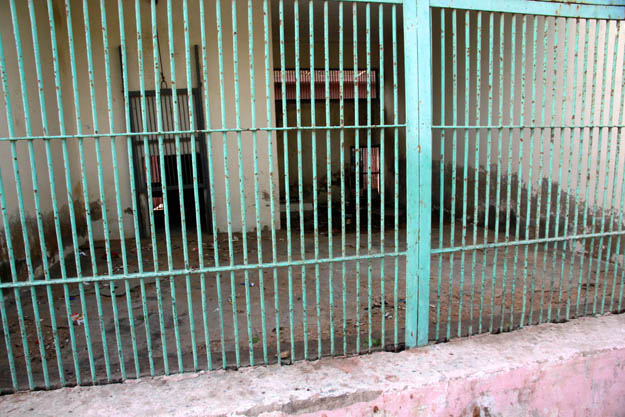 The animals’ cages are filthy and a foul stench emanates from them, driving visitors away. PHOTO: ATHAR KHAN/EXPRESS

Pakistan Animal Welfare Society (PAWS) Co-founder Mahera Omar told The Express Tribune that if we cannot care about the animals, it would be better to shut down the zoos in the city. “How can you cage a wild animal and make it a source of entertainment?” questioned Omar, adding that this is a little more than cruelty.

In the rest of the world, the concept of zoos changed decades ago but in Pakistan we continue to torture animals in cages that look more like prison cells, she lamented. For example, she said monkeys are animals that remain active by climbing trees or other structures but by keeping them in 10×10 concrete cages, they are allowed to eventually die as they are not in anything remotely resembling their natural habitat. 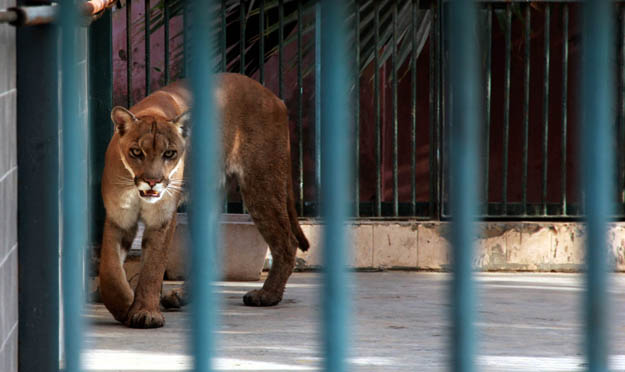 The son of the contractor who manages the zoo said they recently acquired a pair of pumas and hope to get more animals once the Karachi Zoo begins upgrading its facilities. PHOTO: ATHAR KHAN/EXPRESS

“We have heard that wild animals belong in the jungle many times but how can we justify [the way] they are kept inside these cages?” questioned Omar. We the human beings keep earning from the animal’s suffering, she lamented.

Save our animals: Seminar calls for protection of Thar’s wildlife

Zoo Director Fahim Khan refused to comment on the issue, saying he is ‘not answerable to the media’ while acknowledging that the Landhi-Korangi Zoo comes under his authority.