Pope tacks sign on his apartment door: 'No Whining'

Pope tacks sign on his apartment door: 'No Whining' 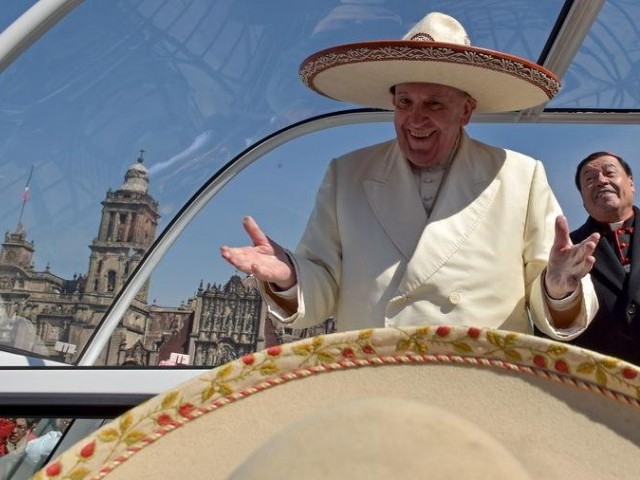 Pope Francis gestures while wearing a Mariachi hat given to him by someone in the crowd on Zocalo Square in Mexico City. PHOTO: REUTERS

VATICAN CITY:  If anyone had any doubts how Pope Francis feels about people who always complain, the answer is now tacked to the door of his frugal suite in a Vatican residence: “No Whining”.

Under the explicit warning, the red-and-white Italian language sign goes on to say that “violators are subject to a syndrome of always feeling like a victim and the consequent reduction of your sense of humour and capacity to solve problems”.

A picture of the sign was posted on the Vatican Insider website and its presence on the pope’s door confirmed to Reuters by its editor-in-chief Andrea Tornielli, an author who is close to Francis and has interviewed him several times.

The sign is adorned with the international symbol for ‘no’ – a backslash in a circle. It adds: “The penalty is doubled if the violation take place in the presence of children. To get the best out of yourself, concentrate on your potential and not on your limitations.” Then the closing zinger: “Stop complaining and take steps to improve your life”. 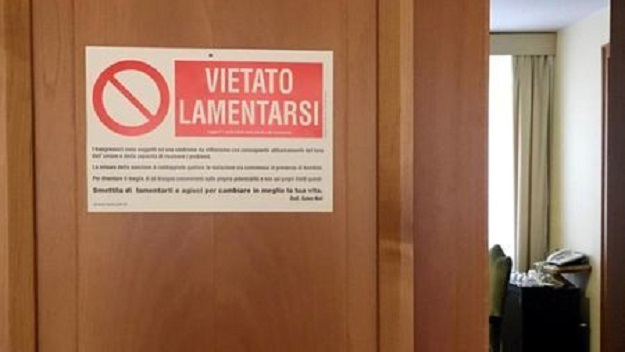 The sign was given to the pope recently by Italian psychologist and self-help author Salvo Noe. Francis promised Noe he would put it up in his office for a laugh.

Francis has had no shortage of complainers in the Vatican and in the Church since his election in 2013. He has tried to steer the 1.2 billion-member Church on a more inclusive and merciful path, angering conservatives who say he his sowing doctrinal confusion.

One recent episode involved German Cardinal Gerhard Mueller, a German whom the pope removed last month from his post as Vatican doctrinal chief at the end of a five-year term.

Mueller, who disagrees with the pope on a number of issues, apparently expected his mandate to be renewed automatically. Mueller later told a German newspaper that the way he was treated was “unacceptable”