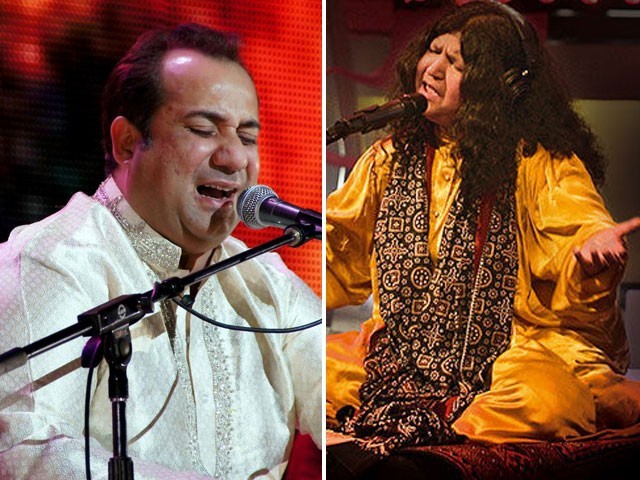 It all seems contradictory, because while musicians are yearning for an improved and reinvigorated music industry, no progress can ensue if they don’t minimise their rates. Artists such as Rahat, who were once in the spotlight at almost every music function, have taken a back seat because they are not paid as much as they demand. Renowned performers are only a common sight at wedding events hosted by the elite or corporate gatherings of some multinational companies.

Rahat Fateh Ali Khan would love to collaborate with this artist

“These singers now only cater to the elite because they’re the only ones that can afford to pay such huge amounts. This is extremely disappointing and I suggest there should be some policy imposed on these singers now. If they call themselves Pakistan singers, then the general public should be given more opportunities to listen to them as well,” Sarwar Shah, CEO at Syed Event Management told The Express Tribune.

According to a source, Rahat and Abida are among the highest charging singers who receive between four and five million for their performances at gigs. Others such as Atif, Ghulam, Hamid and Ali demand between three and four million. Though still expensive for many, singers such as Arif, Naseebo and Humaira charge around one million. “Not a single big artist has performed at a local event in Lahore this year. Event organisers cannot afford the high numbers charged by renowned musicians,” added Sarwar. “Sometimes they perform at high-end hotels or farm houses where the public isn’t allowed.”

Concurring with Sarwar, event manager Imran Sheikh confessed, “Nowadays, we are running our work with the help of average singers because we cannot afford to pay artists such as Rahat Fateh Ali and Abida Parveen.”

This Pakistani artist’s futuristic depiction will blow you away

While event organisers remain united on their opinion regarding the sky-high rates of artists, the latter feel otherwise. “Event planners and the public should understand that we artists move in groups. So, everyone increases their rates together. We have so many expenses that we are forced to demand in millions even though we feel really bad about it. Sometimes we do perform without caring about the charges but most of the times it is not possible for us,” retorted Arif.

The sibling duo of Sher Ali Qawwal and Mehr Ali Qawwal also clarified their reason for charging high rates. “There was a time when we performed at local festivals and we were content from making small amounts of money. But now we cannot afford to provide food for our 10 to 15 group members if we don’t charger higher amounts,” explained Sher.

It was so incomplete I walked out of ‘Project Ghazi’ myself: Humayun Saeed