Is JIT report the end of Maryam Nawaz's political ambitions?

Is JIT report the end of Maryam Nawaz's political ambitions? 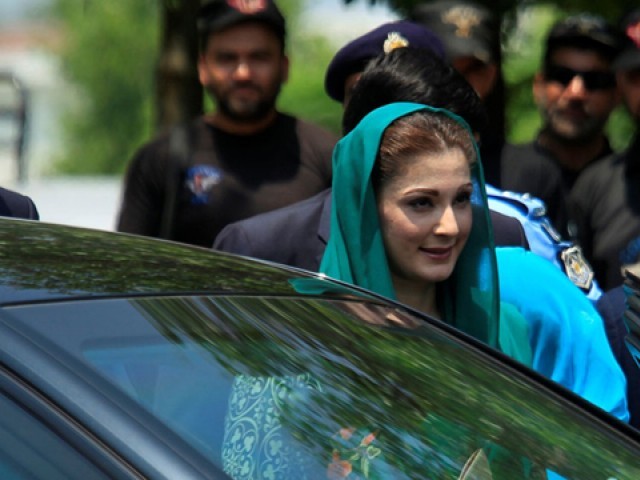 ISLAMABAD: A damning judicial report into the family wealth of Prime Minister Nawaz Sharif threatens not just his premiership, but has also imperilled the political career of his daughter and heir apparent.

Maryam Nawaz Sharif, 43, has in recent years gained greater influence withinNawaz’s inner circle, and is credited with steering him to embrace more pro-women and liberal causes in a deeply conservative nation of 200 million people.

Her feisty social media persona and combative tweets in defence of her father have often pitted her against Nawaz’s rivals.

Now those opponents sense an opportunity to scupper any plans to build a Sharif dynasty around her after a Supreme Court-appointed panel accused her of committing a criminal offence in a 254-page report leaked to the media this week.

“It nips her career in the bud,” Sherry Rehman, vice president of the opposition Pakistan Peoples’ Party (PPP), told Reuters. “It does kill any aspirations for the dynasty – through her at any rate.”

The Joint Investigations Team (JIT) set up by the court alleges the Sharif family’s wealth does not match their income, and accused Maryam and her brothers of signing forged documents to obscure ownership of offshore companies used to buy posh London flats.

Maryam, also known as Maryam Safdar, ‘rejected’ the report and tweeted to her 3.5 million followers that “every contradiction will not only be contested but decimated” in the Supreme Court.

Her 67-year-old father, serving a third stint as prime minister, faces widespread calls to resign but his allies say the report is biased and inaccurate. Maryam did not respond to Reuters requests for comment.

Maryam and her brothers were named last year in the Panama Papers leak as owners of offshore companies used to buy luxury flats in London, prompting opposition politician Imran Khan to threaten mass protests unless the Supreme Court investigated. Imran has been one of her harshest critics and recently called her a ‘princess’, tapping into opposition anger that she appears to wield power within the government without holding any office.

Maryam’s allies say the opposition targets her because she poses a threat: a telegenic young politician who will boost the Sharif ‘brand’ and prolong the family’s rule.

Dynastic politics have a long tradition in Pakistan.

Nawaz’s brother Shehbaz governs Punjab and the opposition PPP is headed by Bilawal Bhutto, whose slain mother Benazir and grandfather Zulfikar, who was hanged, both served as prime ministers.

Maryam rose to prominence in politics when she helped manage her father’s re-election campaign in 2013, courting the youth vote that Imran was connecting with in ever-greater numbers.

Though she does not hold an official position within the government, members of the ruling PML-N party say she was instrumental in implementing a health programme offering free medical care for the poor at government hospitals, a loan scheme for youths, and the upgrading of primary schools in Islamabad.

“She has a policy mind,” said Musadik Malik, Maryam’s friend and spokesman for Nawaz. “Wherever she finds the policy space (on women, youth, minority issues), she pushes the envelope.”

One senior government source said Maryam influenced Nawaz to push ahead with a bill to tackle ‘honour killings’ – the killing by relatives of women thought to have brought shame on their families – that was opposed by many elements of his conservative voter base.

The bill was delayed for years and to muster wider support for its passage Maryam helped organise a screening at Prime Minister’s House of a grim Oscar-winning documentary, “Girl in the River”, about an attempted honour killing in Pakistan.

Nawaz later said “there is no honour in honour killings”, to raised eyebrows in conservative circles.

Ismail added Maryam has Sharif’s ear by virtue of being his daughter, but has not been involved in government policy in economics or other areas outside her interests. “In next five years she will hopefully play an increasing role in policy,” he added.

If the Supreme Court disqualifies Nawaz over the latest allegations, his 65-year-old brother is seen as one of the favourites to take over.

But long-term Maryam is tipped as a future leader, with party insiders hoping she could emulate the late Benazir Bhutto and become a force within Pakistani politics for decades.

Maryam’s critics bristle at such comparisons. “(Benazir) earned her stripes the hard, painful way through jails and exiles and torture. Not in the lap of looted luxury,” said PPP’s Rehman.

The Sharifs are disputing the allegations in the JIT report, but Maryam may face an investigation by the National Accountability Bureau (NAB). The senior government source said NAB investigations tend to last many years – Sharif has an active case against him dating back to 1999 – and NAB’s conviction rates were notoriously low.

“This is not the end for Maryam,” he said. “Not even close.”