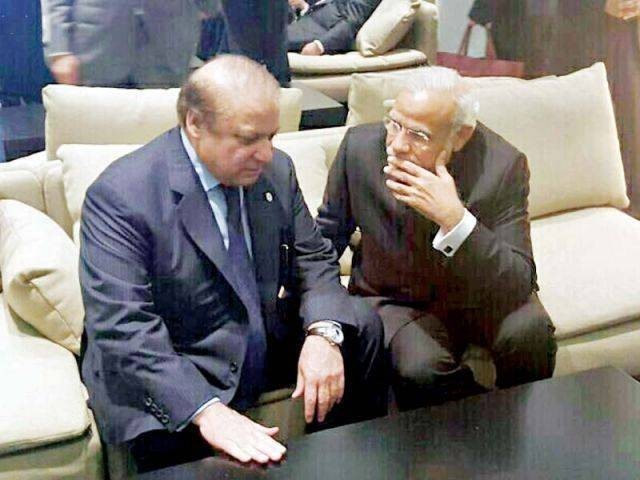 In a file photo Prime Minister Nawaz Sharif and his Indian counterpart Narendra Modi meet ahead of the UN climate summit in Paris. PHOTO: NNI

In what could be seen as a virtual snub to China for offering to mediate in the long-pending India-Pakistan issue, including Kashmir, the Modi government said on Thursday its stand of bilaterally resolving all matters with Pakistan, including Kashmir, had not changed, The Hindu reported.

An External Affairs Ministry spokesperson told reporters that the central issue between Islamabad and New Delhi was “cross-border terrorism perpetrated on India”.

Terrorism was impacting peace and stability in the entire region, he added.

The spokesperson came out with the remarks when asked about China expressing its willingness to play a “constructive role” over Kashmir. Chinese foreign ministry spokesman Geng Shuang made the comment earlier in the day.

On the standoff between the armies of India and China in the Dokalam area, he said diplomatic channels would continue to be used for a resolution of the issue.

Asked about China’s comment that there was no “bilateral meeting” between Prime Minister Narendra Modi and Chinese President Xi Jinping on the sidelines of the G20 summit in Hamburg, he said: “There was a conversation between them. There was a range of issues that was the subject matter of the conversation.”