United in opposition: With one voice, PTI, PPP ask PM to step down

United in opposition: With one voice, PTI, PPP ask PM to step down 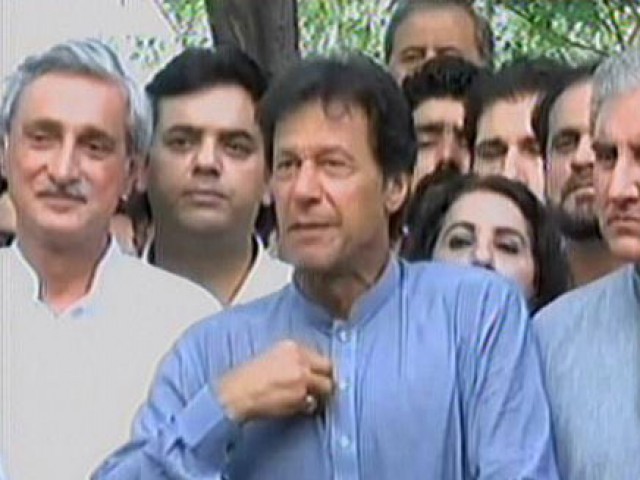 ISLAMABAD/KARACHI: After unveiling of the JIT’s report, both the two major opposition parties – PTI and PPP – on Monday demanded that Prime Minister Nawaz Sharif must immediately resign, with the PTI chief Imran Khan also calling for putting names of the PM and his family members on the no-fly list.

“This is game, set and match. Now, it is a matter of time to see when they will leave the PM House. I will say [names of] entire [Sharif] family needs to be put on the Exit Control List,” Imran told a press conference shortly after the Supreme Court made the JIT report public.

Flanked by senior party leadership, Imran congratulated the nation: “Now, the PTI does not need a street movement; rather the party will soon have to hold street celebrations.”

Before holdimg the press talk, the PTI chief chaired a consultative meeting attended by senior party leaders. In the meeting, the PTI’s legal team briefed the participants on the JIT report.

“He [Nawaz Sharif] has been declared a criminal. The next Monday (when SC will hold hearing of the case) is too far away. What morality does he have to sit in the Prime Minister’s office?” Imran Khan questioned, adding that the PTI had brought the ‘ruling mafia’ under the laws of Pakistan.

Imran said the JIT report vindicated the PTI stance that it was extremely difficult to carry out this investigation against Nawaz Sharif as multiple attempts were made to obstruct justice.

“They [Sharifs] misused institutions to save their skins. They blackmailed and coerced institutions and tried to undermine their credibility to hide their corruption,” he said, adding that his family and the PTI workers were also targeted when they raised voice against injustice and corruption.

He said after the release of JIT report, the National Assembly Speaker Ayaz Sadiq should also resign, as in the past when the PTI asked him to send a reference against the PM, he [Sadiq] ‘in an attempt to blackmail’ sent a reference to the ECP against him [Imran].

“What credibility does he [Sadiq] have now? They (the ruling party) tried to blackmail us in the assembly as well. They are rightfully named the godfathers as they blackmail and coerce and have been doing so for 30 years,” Imran added.

He once again criticised owner of the Jang/Geo group, Mir Shakil-ur-Rehman, saying the SC decision about the group and its owner and publisher was commendable and endorsed the PTI’s long-standing stance over the issue.

“I am so happy Mir Shakil has been brought to this point today as well where contempt notices are issued to him [and his group]. The Jang group has tried to save a criminal by printing stories to discredit the JIT,” he said, adding: “Mir Shakil is fully complicit in these attempts to obstruct justice.”

PML-N bins the report as a ‘piece of trash’

Imran was of the view that today’s SC proceedings and presentation of the JIT report before it was the beginning of a New Pakistan where the law would be equal for all and the powerful would be held to account under the law.

“If the Supreme Court was not independent today we would see them [the PML-N] attacking it again. But the nation set a precedent during the lawyers movement and they know the nation will not let anything happen to our courts,” Khan said.

Talking about a defamation case filed against him by Punjab CM Shehbaz Sharif, Imran said the CM should be ashamed of himself as he was member of a corrupt family.

Nearly half of Japanese people entering their 30s are virgins