Voters in PS-114 come out en masse for by-election

Voters in PS-114 come out en masse for by-election 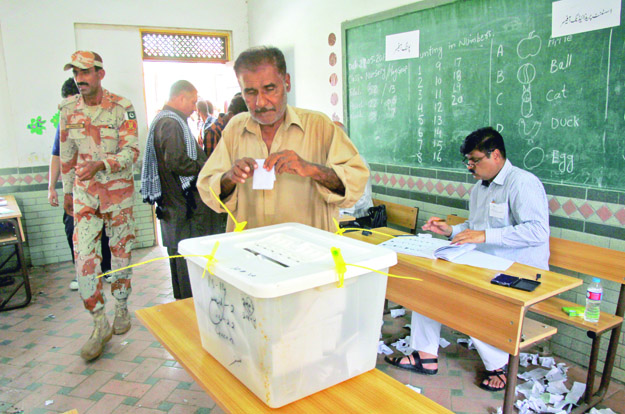 The by-election proceeded in a by and large peaceful manner due to the presence of law enforcers. PHOTO: ATHAR KHAN/EXPRESS

KARACHI: Excitement buzzed in the air on Sunday as residents of PS-114’s Mehmoodabad, Manzoor Colony, Azam Basti, Akhtar Colony, Defence View and Chanesar Goth stepped out of their homes and into the polling stations to vote for their new provincial assembly representative. A sea of red, green, blue, black and white flags and posters covered the area, as music from election camps blasted party songs.

Though it was a by-election, many said the atmosphere was one of a general election, with tight security and a huge turnout.

Compared to previous elections, the election in PS-114 witnessed a great turnout. The constituency comprised 92 polling stations and a total 185,179 registered votes. 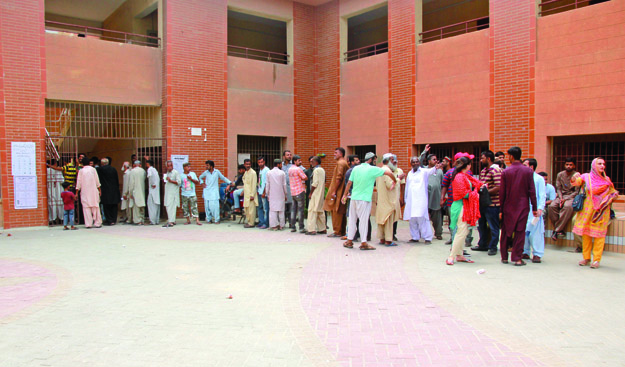 Though it started slow, the turnout at the by-election surprised even the polling officers. PHOTO: ATHAR KHAN/EXPRESS

The seat fell vacant when Pakistan Muslim League – Nawaz candidate Irfanullah Marwat’s victory in the 2013 general elections was declared void by the election tribunal in July, 2014 and re-polling was called for.

PS-114 by-poll preps: ECP all set to use Android app to transfer result forms to Islamabad

The day started off with voters trickling in due to the holiday. The pace picked up after lunch.

“People mostly came late [to vote] and a rush was observed at the polling stations after 2pm,” said a Rangers officer on duty at Defence View School. “It is like a general election; it definitely doesn’t seem like a by-election at all,” said a polling officer in Junejo Town. A presiding officer at the Government Boys Secondary School polling said by 1 pm almost 50% votes had been cast, which was very surprising for a by-election.

The level of security at polling stations varied and was illustrated by the fact that the Rangers at some stations barred media personnel from entering despite possessing Election Commission of Pakistan (ECP)-issued media passes, while others welcome them wholeheartedly. Media personnel were not allowed to enter some polling stations despite the issued passes by the Election Commission of Pakistan (ECP). 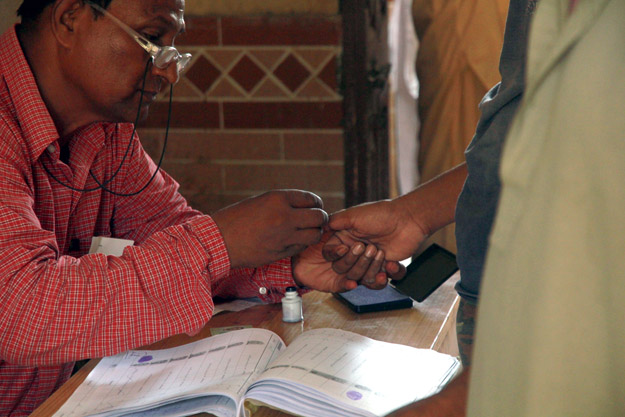 There were a lot of security and checks for prospective voters to go through before being allowed to cast their vote. PHOTO: ATHAR KHAN/EXPRESS

“This pass seems fake, as the year on the pass has been changed manually,” said an election officer at Royal Grammar School in Defence View. The passes issued to the media originally stated the year as 2015, with the five crossed out and a seven written in black marker on top of it.

The election officer claimed that the ECP had not informed them about media passes, so they would not allow anyone save voters to enter the premises.

At some polling stations media persons were allowed in but were not allowed to take pictures, even of the buildings.

Experienced agents also helped agents who were new to the electoral process. “She helped me understand how the lists work so that I could work as efficiently as the others,” a PTI polling agent said about her peer from MQM-Pakistan.

Polling agents on duty at the government girls secondary and primary schools in Akhtar Colony also shared how law enforcement officers were cooperative and helped both the voters and officers.

Some presiding officers complained about the lack of facilities available at the schools. “The washroom at the school was not functional and we had to wait three hours for it to be cleaned,” said a polling officer at a school in Akhtar Colony.

The process for casting a vote involved a great deal of checking and security. The first check was at the polling station’s main gate by a Rangers official. The second check was by a police officer who verified that the voter’s CNIC was valid, their mobile phone switched off and their bags clear of anything suspicious. After this, Rangers officials deployed on each floor of the polling stations rechecked the CNICs and tallied them with their voter books. 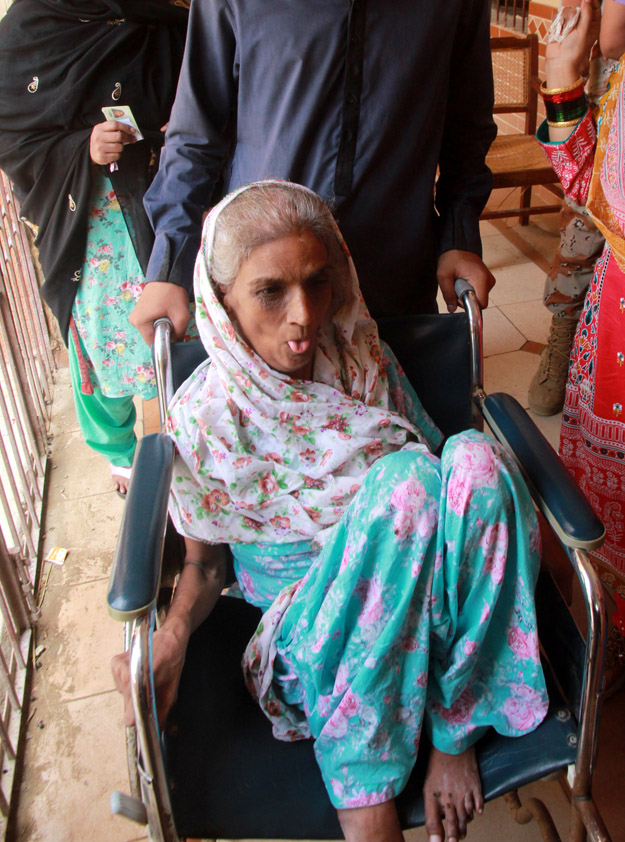 There were no facilities for differently-abled or elderly voters who could not climb stairs. PHOTO: ATHAR KHAN/EXPRESS

Political parties, including the MQM-Pakistan and PPP, were found violating the code of conduct in Defence View and Junejo Town, where they were visiting residents door-to-door after 3pm, asking whether the people had cast their votes. “They offered to take along anyone who hadn’t casted their vote yet in their car,” said a resident, Salman Mujtaba.

The polling stations lacked facilities for elderly or differently-abled voters, as many stations were located on the first floor.

“Many females who cannot climb two flights of stairs have gone back without casting their votes,” said a polling agent at the Al-Khair Academy in Junejo Town. Polling agents from different political parties demanded that the ECP take notice of this and allow the elderly voters to cast their votes on the ground floor.

“Such cases are recorded every time an election is held but we cannot help them other than aiding them in climbing the stairs to cast their votes,” said a female police officer who was helping 78-year-old Shaista Bano climb to the first floor to cast her vote.

“I have been living in this area for 74 years. Voting is my right and I will vote for as long as I am alive,” said Rasheed Bhatti, after casting his vote in Rana Academy.

An elderly wheelchair bound woman, Samina, said she had come to cast her here to cast the vote as it was her right and she had been voting in every election since she attained the age of 18.

Another man, Mehfooz Alam, who was disgruntled by all the political parties, said that neither was he voting nor was anyone else from his family, as the political party representatives would vanish at 5pm and only show up before the next election.

He said the situation in the area after the recent rainfall was a test case for all the parties but no one came to help them, therefore it is better not to vote.

The situation in most areas of the constituency remained peaceful except for Chanesar Goth, where after a clash between PPP and PTI workers in the morning at the Government Boys Secondary School polling station. The mood in the area was tense until 5pm. Two other minor incidents were reported but could not escalate due to the strong presence of law enforcers. 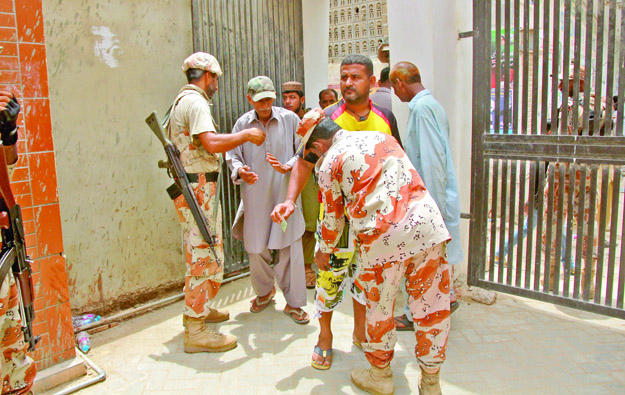 All voters were searched twice before being allowed to enter the polling station. PHOTO: ATHAR KHAN/EXPRESS

Later, Rangers Director-General Major General Muhammad Saeed confirmed that two arrests were made – one for possession of weapons and another for rigging. He said that only this polling station witnessed violence.

It is good to see a large number of voters coming out to vote, as such things are hardly witnessed in by-elections, he said. Major General Saeed added that they have not received any formal complaints from any party against anyone.

Words from the wise

PTI leader Imran Ismail told The Express Tribune that they are optimistic about the result and are hopeful that they will win the seat. He accused the PPP of using the state resources for their campaign, but claimed that despite this, they will not win the seat.

On the other hand, PPP candidate Senator Saeed Ghani who cast his vote at the Government Boys Secondary School polling station said that he was not satisfied with the behaviour of the Rangers personnel and questioned their neutrality. He also said that if a person was arrested for rigging, they should be investigated.

District Returning Officer Asghar Sial said he had been visiting all the polling stations and was in contact with all the political parties for their complaints. He said if he received a formal complaint he would take action.

The ever lingering fate of the Fyzee Rahamin Art Gallery