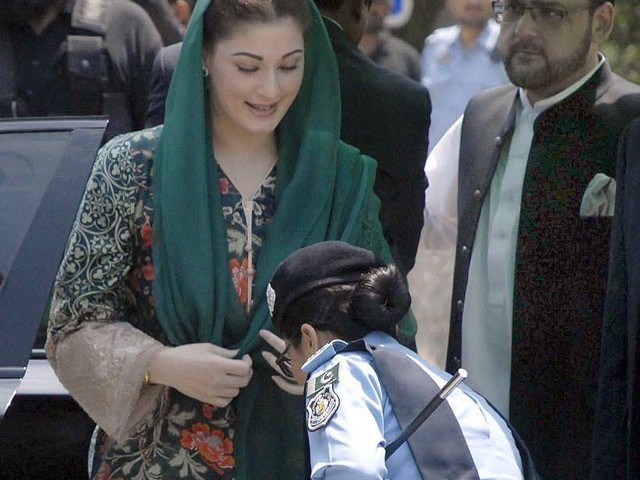 SSP Arsala Saleem picks up a pen for Maryam Nawaz from the floor as she arrives at the Federal Judicial Academy to record her statement before the JIT investigating Sharif family’s offshore assets. PHOTO: ONLINE

Two days after a female officer of Islamabad police found herself in the midst of a controversy for saluting Maryam Nawaz during her visit to the Federal Judicial Academy for appearing before a joint investigation team (JIT) probing her family’s offshore assets, the premier’s daughter has reciprocated her gesture.

“We salute the daughters, not the ranks! If they respect you, respect them back! All salutes are not protocol. Respect comes from the heart,” Maryam tweeted on Friday.

We salute the daughters, not the ranks! If they respect you, respect them back ! All salutes are not protocol. Respect comes from the heart. pic.twitter.com/EkMcpfYRY2

On Wednesday, when the premier’s daughter reached the judicial complex in Islamabad, SSP Arsala had saluted her and picked the former’s pen from the ground.

This gesture landed the woman police officer in trouble as a lawyer sent her a legal notice, seeking an ‘explanation’ and an ‘apology’ within 15 days for saluting a person who does not hold any public or government office.