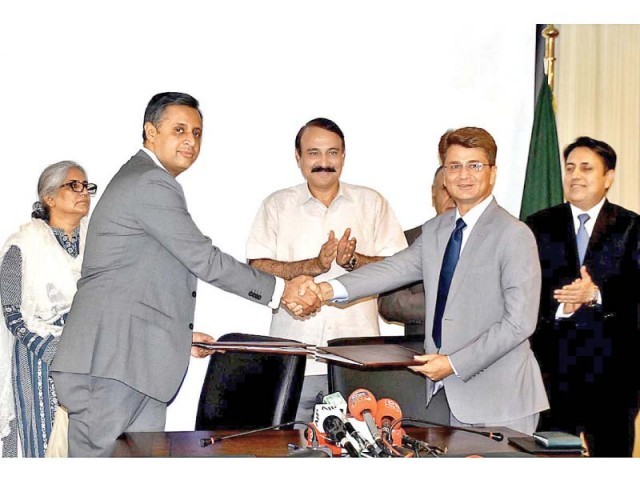 An MoU was signed between CADD and USF for establishing computer labs in 119 schools of ICT. PHOTO: APP

ISLAMABAD: Minister for Information Technology and Telecommunication (MoITT) Anusha Rehman on Thursday said that information communication technology was the lever of economic progress and that the government was using the lever to empower the girls hailing from marginalised sections of society.

She said this while addressing a ceremony where a memorandum of understanding (MoU) was signed between the Universal Service Fund (USF) of the MoITT and the Federal Directorate of Education of the Capital Administration and Development Division (CADD). USF Chief Executive Officer Haaris Chaudhary signed the agreement with FDE director general.

Thursday’s agreement marks the second phase of the project. Earlier in March, the USF and FDE and Microsoft had signed an agreement to set up labs at 107 schools located in the rural areas of the capital while over 90 teachers would be trained to teach children at these labs.

Under the second phase of the project, computer labs would be set up at the 119 government girls’ schools within the Islamabad Capital Territory. Moreover, 119 teachers will be hired to train 85,581 students in the capital.

This project is being run in collaboration with Microsoft, which will impart computer technical training skills, including coding and cloud computing to students at a later stage. The project, Rehman said, aims to benefit girls at these schools by making girls computer literate, fostering digital coding skills and building early-stage aptitude for ICT-related careers.

Rehman said that the project would facilitate young girls in becoming entrepreneurs and contributors to the knowledge-based economy, and the future builders of the nation. The programme, she hoped, would also reduce the gender disparity in ICT.

Minister of state for CADD Dr Tariq Fazal Chaudhary also attended the ceremony and said that the project would help bridge the IT and education gap between the urban and rural areas of the country.