It has taken the Sindh govt almost a year to place a few girder­s on a small portio­n of the flyove­r
By Oonib Azam / Photo: Athar Khan
Published: June 30, 2017
Tweet Email 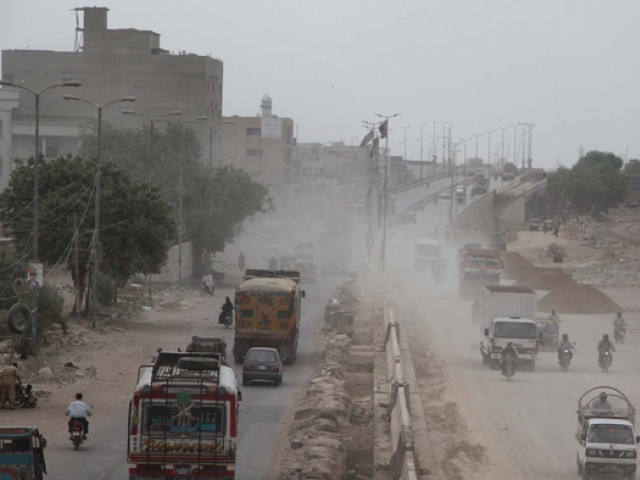 Hundreds of shops have been forced to shut down or move elsewhere during the last one year due to the construction of the Malir 15 Flyover. PHOTO: ATHAR KHAN

KARACHI: The Malir 15 Flyover seems to be jinxed. Four-and-a-half years have passed since the launch of the flyover but it has yet to see the light of day. Officials believe it will take two-and-a-half more months for the flyover to be completed while the residents have lost all hope for its completion.

On February 8 last year, then chief minister Qaim Ali Shah and MNA Faryal Talpur had inaugurated half of the flyover from Malir 15 bus stop to Millat Bakery after missing uncountable deadlines in the past. During the inauguration, Local Government Minister Jam Khan Shoro had announced that the flyover’s portion from Quaidabad to Azeempura, which expands over the Pakistan Railways’ track, will be completed by June, 2016. It is now June, 2017 and the flyover is nowhere near completion.

When The Express Tribune visited the site in September last year, an official of EA Consulting Private Limited – the consultants of the project – claimed that 100% pilling work for the remaining portion of the flyover has been completed and now they just needed to place the girders, after which the said section of the flyover will become functional.

Almost four months later, in January this year, when The Express Tribune visited the site again, no girder had been placed. The roads were completely broken and dust had engulfed the area. Now, almost six months later, when The Express Tribune re-visited the area, a few girders have been placed. So all in all, it took the Sindh government almost a year to place a few girders on a small portion of the flyover.

Meanwhile, the Karachi Metropolitan Corporation’s (KMC) engineer on site, Syed Ishrat Rehan, told The Express Tribune that 40% of the work has been completed. “The girders needed to be placed over the Pakistan Railways track,” he said, adding that the ramp at the Azeempura portion also needs to be completed.

Rehan said that due to Ramazan and Eid, the movement of trains has become so frequent that they are unable to work over the railway track.

Earlier, an official of the KMC had said that even four years after the initiation of the project, they had yet to receive a no-objection certificate (NOC) from Pakistan Railways. A portion of the flyover, which is under construction, has to be constructed over the Pakistan Railways’ track and the NOC has to be obtained from Lahore, the official had said, adding that apart from the railway track, there are five residential quarters of Pakistan Railways that have to be demolished.

Meanwhile, the divisional superintendent of Pakistan Railways in Karachi, Nisar Ahmed Memon, had said that they issued the NOC a long time ago and the KMC should expedite the work.

Small and large scale businesses in the area are being adversely affected. “The construction of this flyover for the past several years has brought us on the roads,” lamented the owner of Neo MashaAllah Paint Shop. “Look at the condition of the road. Customers don’t make their way to our shops anymore.”

Another shopkeeper said that hardly any labourers are seen working on the flyover. “Gusty winds blow throughout the day and we have to sit inside the shop, keeping our faces covered,” he said, adding that they would not have faced such a loss had the government expedited the construction work.

According to a resident of the area, Zeeshan Khanzada, the quality of the constructed flyover is extremely poor. There is a ditch in the flyover’s ramp going towards the airport, he said.