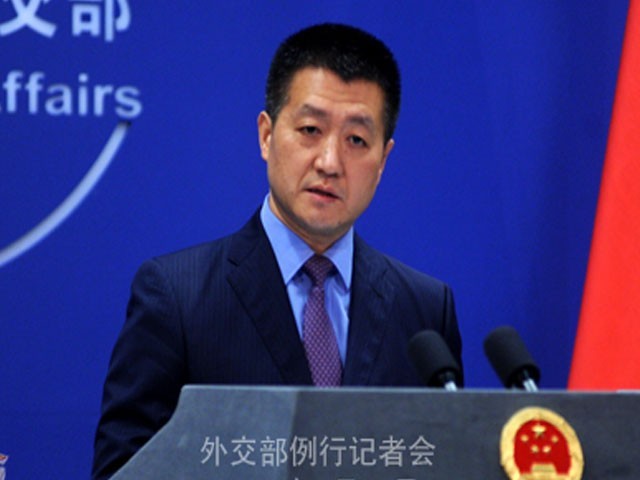 Says the country has made an important contribution to the international campaign against terrorism. PHOTO: WWW.FMPRC.GOV.CN

BEIJING: China on Wednesday said Pakistan was at the forefront of counter-terrorism and had made an important contribution to the international campaign against terrorism.

“I must say that Pakistan is at the forefront of counter-terrorism and has made an important contribution to the international campaign against terrorism,” Chinese Foreign Ministry spokesperson Lu Kang said during a press briefing.

The spokesperson said the Chinese side maintained that the international community should step up cooperation against terrorism, and should also fully recognise Pakistan’s efforts in this regard. Regarding counter-terrorism and issues relating to other countries in the region, Lu Kang said, “We have noted the relevant reports. I would like to say that the Chinese government is consistent and clear on counter-terrorism.”

He said China opposed all forms of terrorism and linking terrorism with any specific country, adding, “We call for international cooperation against terrorism on the basis of mutual respect.”

Responding to a question regarding Indian Prime Minister Narendra Modi’s recent meeting with US President Donald Trump in Washington, he said, “We have been saying that China welcomes friendly and cooperative relations among all countries, and hope that such kind of relations will contribute to peace, stability and prosperity of the region and beyond.”

“We think it is quite normal for leaders of two countries to talk about issues of common interest, as long as their interaction is conducive to peace, stability, and prosperity of Asia.”

About the discussion and consensus between US and Indian leaders on the issue of Afghanistan, the Chinese spokesperson said that the realisation of peace and stability in Afghanistan at an early date served the common interests of the entire region. “China always supports the “Afghan-led and Afghan-owned” reconciliation process which is inclusive. We also welcome all parties’ constructive efforts in this aspect,” he added.

About the reopening of Nathu-la pass in Sikkim section of China-India border for Indian pilgrims, Lu Kang said, “We have told the Indian side that the arrangement was put off as an emergency measure in response to the change of the situation caused by the Indian border troops’ trespass.”

He stressed that Indian pilgrims’ trip to Xi Zang required necessary atmosphere and conditions, adding, the Indian side was to blame for the trip not being able to take place as scheduled. “As for when the pilgrimage route will reopen, it totally depends on whether the Indian side can correct its mistake in time.”

The Chinese spokesperson continued that China’s construction of a road in Doklam was an act of sovereignty on its own territory, adding, “It is completely justified and lawful, and others have no right to interfere”.