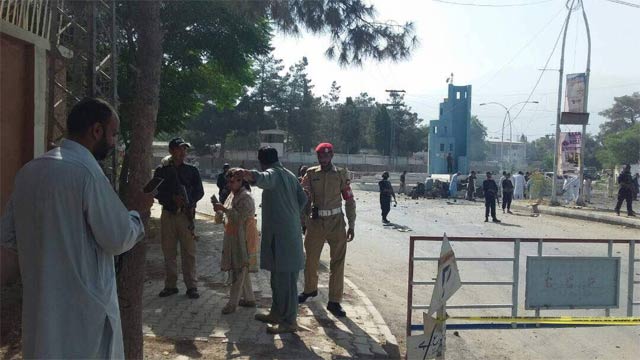 A police official is said to be among those killed. PHOTO: EXPRESS

QUETTA: At least 13 people – among them seven policemen – were killed in a suicide car bombing outside the office of Balochistan’s police chief on Friday morning.

There were competing claims of responsibility for the attack which also left over two dozen people injured including four military men, a woman, and a girl. At least five of the injured are said to have life-threatening wounds.

Jamaat-ul-Ahrar (JuA), a splinter group of the outlawed Tehreek-e-Taliban Pakistan, claimed it was behind the deadly bombing, while the Islamic State terrorist group, also known by its Arabic acronym Da’ish, said one of its followers had carried out the carnage.

“We have received 13 bodies and 20 injured people,” Wasim Baig, the spokesman for Quetta’s Civil Hospital, confirmed to The Express Tribune. The four injured military men were driven to the Combined Military Hospital (CMH). 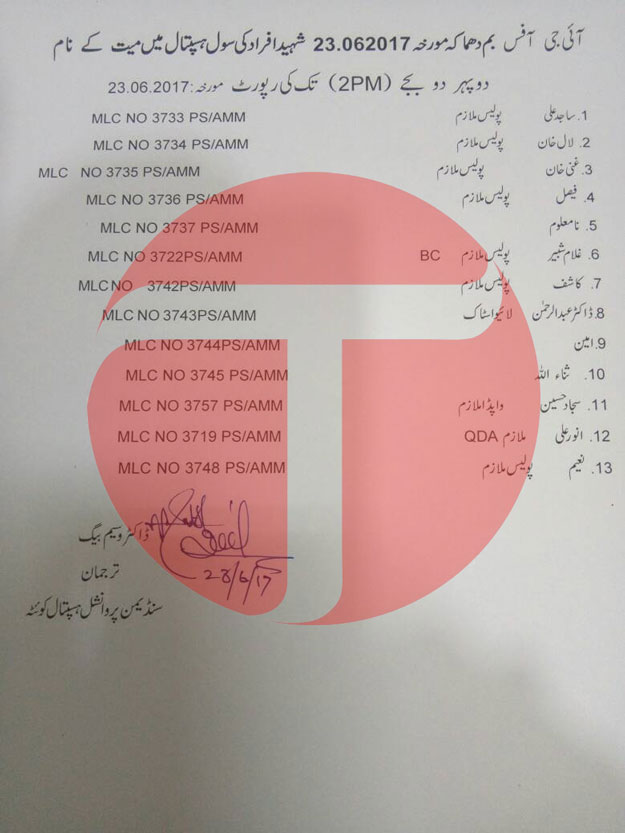 The bomber first tried to ram his explosives-laden car into a peripheral wall of the office of IG Police, according to official sources. He did drive the car into the wall, but it didn’t explode. Unaware of the fact that the car was rigged with explosives, the policemen present at the site retrieved the vehicle from the wall and brought it to Shuhada Chowk. They asked the driver, who happened to be the bomber, to get down and started searching the vehicle.

The driver refused to alight and instead triggered the explosives, killing seven people, including four policemen, on the spot and injuring several others. Balochistan Constabulary and Frontier Corps personnel and policemen cordoned off the site and shifted the casualties to the Civil Hospital where a state of emergency was declared.

At the hospital, worried children stood by the bloodstained cots of wounded relatives, and soldiers visited injured colleagues.

Stunned survivors could give few details about the attack. “I was sitting on a chair. There was an explosion. I got injured and fell down,” said one victim, Gulzar Ahmad.

“The roads linking Shuhada Chowk were strewn with human limbs,” another witness Muhammad Zahid told The Express Tribune. “Some of the bodies were mutilated beyond recognition.

Official sources confirmed it was a suicide blast. “We have found body parts at the site, but we have yet to identify the limbs of the bomber,” one police official said.

DIG Abdul Razzaq Cheema told journalists at the site that it was not immediately known who the bomber wanted to target. A provincial government spokesperson, however, speculated that the IGP Office was the possible target. “The blast took place near the IGP office when policemen standing guard there started checking the car,” Anwarul Haq Kakar said.

Several important buildings, including Central Police Office, State Bank of Pakistan, Army’s Jinnah check-post, and residence of the provincial home minister, are located in the neighbourhood where the bombing took place.

A checkpoint on Mission Road Chowk was wrecked by the bombing. A vehicle carrying army troops was also damaged in the blast. As a result a captain and three soldiers were wounded who were ferried to the CMH.  Two other four-wheelers, two auto-rickshaws and two motorcycles were also destroyed in the bombing.

The thud of the powerful blast smashed the windows of several buildings in the neighbourhood and brought down the walls of a nearby girls school. Bomb Disposal Squad officials said the car was possibly rigged with 90 to 95 kilos of explosives.

Home Secretary Dr Akbar Harifal said security has been stepped up in Quetta and other areas of the province. Authorities have identified 12 bodies and handed them over to heirs after medico-legal formalities.