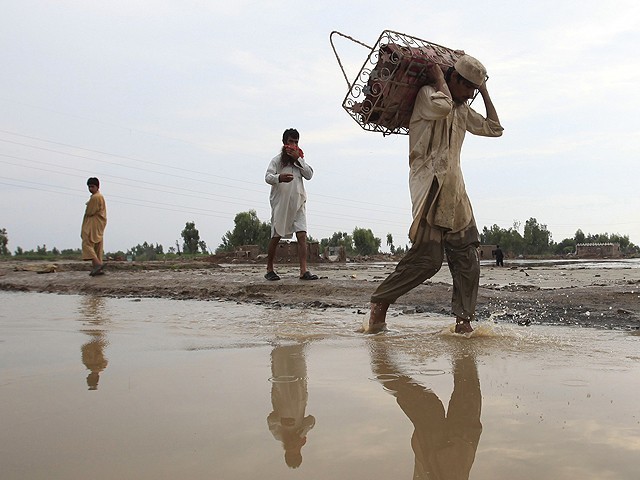 The NDMA poured over precautionary measures undertaken as part of a comprehensive review of the flood control programme. PHOTO: REUTERS

ISLAMABAD: Officials of the National Disaster Management Authority (NDMA) have urged officials and relevant departments to ensure that rescue, relief and other related machinery should be functional and pre-positioned along Nullah Leh so that they are prepared in the event of a flood in the drain.

The NDMA on Thursday poured over precautionary measures undertaken as part of a comprehensive review of the Nullah Leh Flood Control Programme.

An integrated flood management approach is presently being taken to effectively manage and mitigate flood in all over the country.

In this context, a meeting was held here on Thursday at National Disaster Management Authority (NDMA) to review the precautionary measures undertaken as a part of a comprehensive Nullah Leh Flood Control Programme since it is a major flood risk for Rawalpindi.

The meeting was attended by the representative of all stakeholders including the Rawalpindi district administration, PMD, army officials, Water and Sewerage Authority (WASA).

NDMA Member Operation Brigadier Mukhtar Ahmed highlighted the need to keep rescue, relief and other related machinery functional and their pre-positioning should be done according to the impending threat.

NDMA’s continuous assistance and guidance during the impending monsoon season were also assured to all stakeholders.