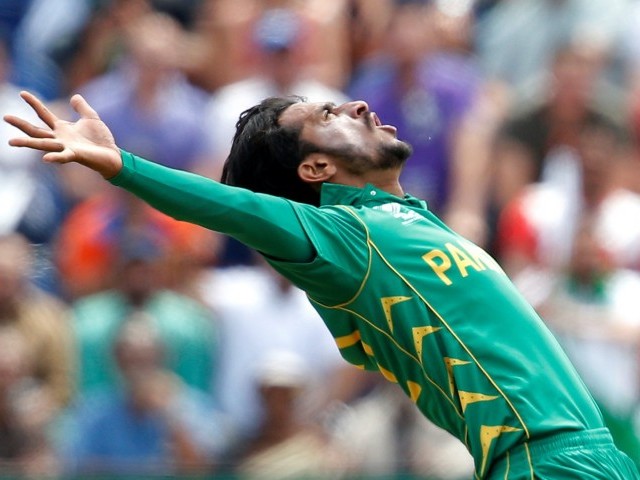 LONDON: Pakistan’s newest cricket darling Hasan Ali turned a lot of heads in the 2017 ICC Champions Trophy, not just with his lethal bowling but also with his post-wicket celebrations.

Some quipped it was his tribute to the millions of electricity-deprived compatriots who spend their summers starting generators when the power is out since it seems like he is revving up a generator.

But Hasan has revealed that his two-part celebration is actually the imitation of a bomb explosion, wherein he pumps the blasting machine, which then leads to an explosion.

Hasan Ali: the hero of the ordinary

“It’s the love of the people that they are likening my celebration with starting a generator,” said Hasan in an exclusive interview with Roznama Express. “But I will clarify here that my celebration is actually a bomb that gets blasted after I take a wicket.”

Hasan’s mercurial rise has left many perplexed, including himself as he admits he never really thought he would emerge as the player of the tournament.

“No I hadn’t planned it precisely, but it was sort of a dream and a long-term goal of mine to star in an International Cricket Council (ICC) event like Wasim Akram did,” he said.

He, however, does back himself against the world’s top batsmen.

“When you play so much cricket your paths are bound to cross with some of the game’s top batsmen, but if you bowl good deliveries to them even they will get out,” said Hasan. “So yes, I wanted to take big wickets and serve Pakistan cricket to the best of my abilities.”

While Hasan may have wanted to influence an ICC event a la Wasim, it’s his former partner-in-crime Waqar Younis who he tries to emulate.

“I’ve always said that my favourite bowler is Waqar ,” said Hasan. “He is my cricketing idol. I follow him and try to bowl like him. He also helps me a lot, for which I am very grateful.”