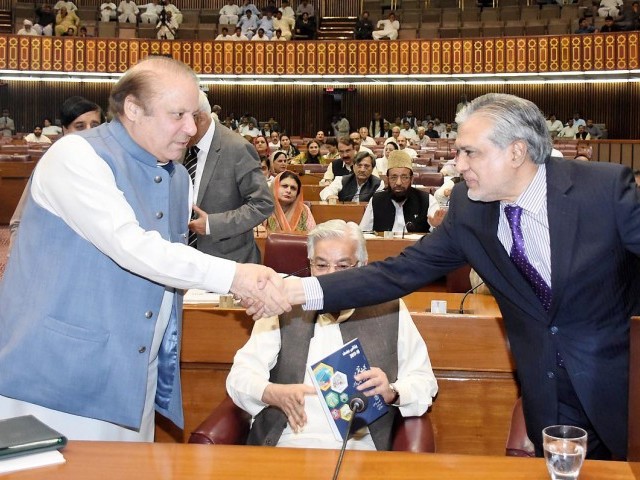 It should focus more on increasing the welfare of people through structural reforms. PHOTO: NNI

LAHORE: Although the gross domestic product (GDP) is a statistical measure, it is used and manipulated by politicians to gain maximum mileage.

By showing a high GDP reading, politicians can portray that the economy has significantly improved vis-a-vis the previous political dispensation and the previous year.

On this basis, they can impress a large pool of people that the economy is booming. This situation demands a natural question whether the GDP statistics are reliable or not.

By revising down the GDP of previous administration, one can easily show that the economy is much better during the tenure of this government. A layman will just look at the number and be impressed with the high number.

The government has provisionally projected that the current year’s GDP will grow by 5.28% on the basis of nine-month data. This figure is nicely exaggerated to show that the economy has experienced a higher growth in the last 10 years.

Time and again, this kind of headline is trumpeted for political point-scoring. Since final estimates will come out in 2019, those numbers will be at the mercy of the upcoming finance minister. However, the numbers will be slightly revised down regardless of the government.

Another important metric is the debt-to-GDP ratio which, according to a law passed by one of the previous parliaments, should be around 60%.

The magic number of 60 has important political ramifications. Whenever the number exceeds 60, the media starts to criticise the government that it is living beyond its means. These headlines are quite popular, but have less economic significance.

The usual reply of the government is that debt has been accumulated by previous administrations and it is not only successfully managing it, but also reducing it. Sometimes criticism compels the government to invent a new definition since necessity is the mother of invention.

In Pakistan’s case, the government redefined the federal debt in the light of international best practices. This invention brought a new name – the net debt-to-GDP ratio.

One has to ask a simple question. The numerator is in net while the denominator is in gross. In economics, it can be called apple and orange comparison.

Another traditional metric is the GDP per capita ie the GDP/population, which is an important measure of welfare. If the GDP per capita increases every passing year, it will be considered that the economy is performing well and catering to the requirements of population.

In the community of nations, this old metric is, sometimes, used for comparison purpose and even enhances the prestige of a country.

After doing all these revisions and window dressing, the finance minister has pondered to re-evaluate the GDP. It is hoped that the re-evaluation exercise will increase the GDP to around $350 billion.

Why is this so? The answer is 2017 census. Since census has been held after 1998, there are guestimates that the population figure will be higher than the expected one.

In order to maintain and even increase the GDP per capita, a higher numerator will be a better option. Moreover, the higher GDP will create a reasonable cushion for borrowing.

In a nutshell, the government should give less attention to accounting exercises and focus more on increasing the welfare of masses through meaningful structural reforms.

For instance, if the government tries to reduce the growing informality in the economy, the GDP will increase. Such reforms will bring reliability in the statistics which are necessary for development.

The writer is Assistant Professor of Economics at SDSB, Lahore University of Management Sciences (Lums)