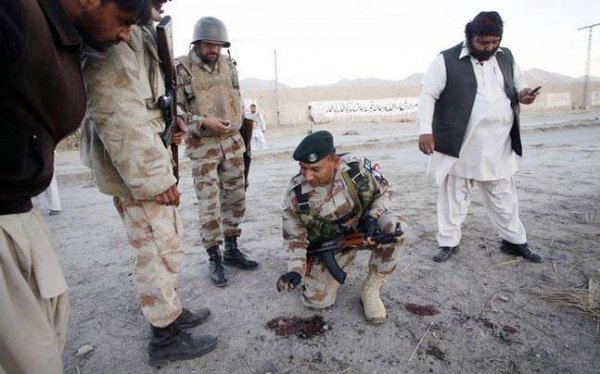 QUETTA: One man was killed and six others, including four children, were injured after an explosive device targeting a pickup truck went off in the Washuk district of Balochistan on Saturday.

According to a Balochistan Levies official, the blast took place at around 2pm in Mashkail tehsil near the Pak-Iran border. He added that the pickup truck was targeted with a remote-controlled device and the vehicle was completely destroyed.

“Shoukat Gangozai, alias Meera, was travelling in the vehicle along with six of his family members,” said the official. The explosion killed Jalal Ahmed on the spot, while Gangozai, his wife and four children were injured, he added.

The injured were shifted to the Dalbandin district headquarters hospital where the condition of Gangozai’s wife was stated to be critical.

The victim’s family alleges that the bomb was planted in the vehicle by one of their Irani relatives who left for Iran a day ago. A case has been registered and investigations are underway.

A Levies official was injured in an exchange of fire between the force and unidentified men on Saturday.

The Levies personnel were on a routine patrol when fired upon in the Sabazkoh area of Panjgur. The injured official was identified as Muhammad who was shifted to the local hospital.

A mutilated corpse was recovered by the police from the Western bypass area of Quetta on Saturday, and shifted to the Bolan Medical Complex.

The deceased was identified as Zahoor Ahmed who was a resident of Mangochar. The body was handed over to the heirs after the completion of medico-legal formalities.