Arrest four LeJ terror­ists who were planni­ng suicid­e attack on the main proces­sion
By Our Correspondent
Published: June 18, 2017
Tweet Email 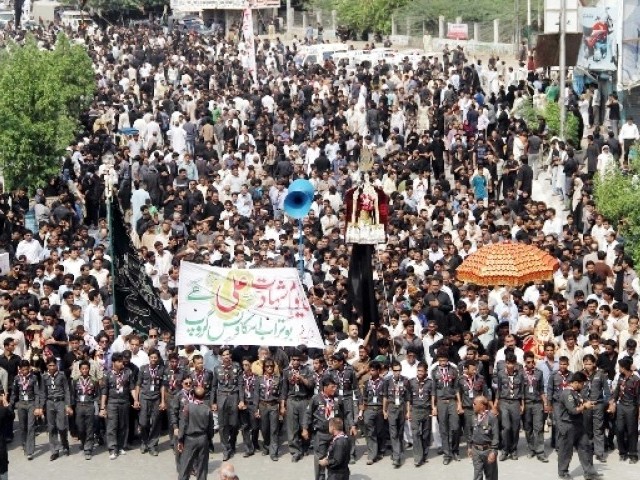 KARACHI: Rangers foiled a major terror bid in Karachi on Saturday as cities across the country observed Youm-e-Ali peacefully.

The paramilitary force arrested four Lashkar-e-Jhangvi (LeJ) terrorists from the Orangi Town locality of the metropolis just hours before a Youm-e-Ali procession was to start off. The terrorists were planning to carry out a suicide attack on the procession, claimed the Rangers.

“An explosive vest, 15 kilogrammes of explosives, 18 hand-grenades and other arms and ammunition were seized from the terrorists’ possession,” a Rangers spokesman said in the statement. “The troops arrested them on intelligence-based information. They were ready to attack the procession when troops arrested them,” he added.

The spokesman appealed to the citizens to cooperate with law-enforcement agencies and immediately inform the paramilitary force of any suspicious activity noticed by them.

Youm-e-Ali: Security beefed up in Multan

Cities across Pakistan observed Youm-e-Ali to commemorate the martyrdom of Hazrat Ali (RA) amid tight security on Saturday.

Mourning processions were taken out in all cities with due fervour and reverence, and the day concluded without any incident.

Processions were also taken out in Sukkur, Larkana and Kamber-Shahdadkot districts.

Sindh police chief A D Khawaja had asked senior law-enforcement officials to supervise main processions in the entire province. The Sindh government also imposed a one-day ban on pillion riding in parts of the province, including Karachi and Hyderabad, on the recommendation of the Sindh police.

In Lahore, the main procession, attended by thousands, started early in the morning from Mubarak Haveli inside the Mochi Gate and culminated at Karbala Gamay Shah in the evening. Around 400 small processions were also taken out in various neighbourhoods of the Punjab capital. At least 7,000 police officials, 12 SPs, 34 DSPs and 80 SHOs performed security duties on the occasion and teams of paramedics accompanied the procession.