Transgenders: accepted on paper, not in practice

Transgenders: accepted on paper, not in practice 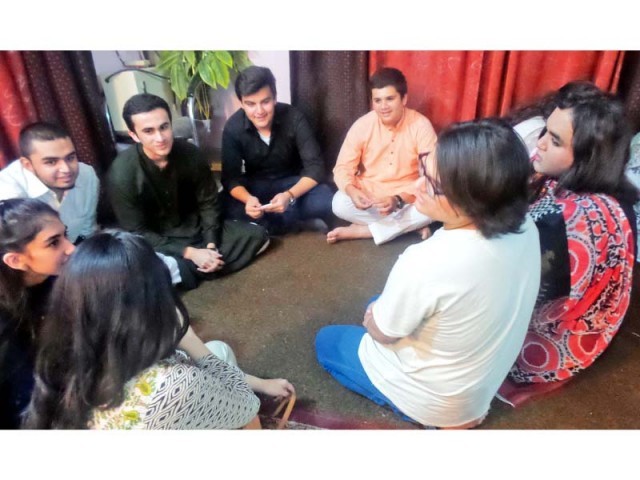 LAHORE: The mission to give the transgender community their due rights and legal status may have won its battle in theory and on paper, but the struggle to give them social equality remains a distance dream.

In order to achieve just that, an organisation called Haath Barhao has been founded by university student Amna Riaz and her friends to create a space where transgender people can interact with mainstream society and feel accepted.

The transgender community in general continues to face discrimination and its members struggle to find reasonable outlets to earn money.

Given the continuous wave of abuse and ridicule faced by them, there is a dire need to create forums through which people can give transgender people the respect they deserve.

Recently, Haath Barhao, in collaboration with The Next Generation Pakistan, a youth-based charity working for social development, held an Iftar for the acceptance of the third gender. The aim was to combine the spiritual and holy sentiment of Ramazan and integrate the third gender into the society, thus negating their alienation.

According to Amna, the campaign, which began in 2016, is essentially working towards social acceptance and financial empowerment of the transgender community.

She continued that the organisation was currently conducting bimonthly meetings and interactive sessions, inviting representatives from small businesses, organisations and students to sensitise them with issues transgender people face.

The Iftar event, which hosted more than 65 people, is part of a sensitisation campaign through which members of the community narrate stories and highlight their issues to participants, who are mostly teenage students.

“We also encourage people to share their misconceptions which are then addressed by the community itself”, Amna said.

According to her, households and businesses are not willing to hire transgender people, while the community itself lacks the skills as all they have been taught is dance, prostitution or begging.

“Even if they manage to get jobs, it is at minimum wage. That is a lot less than they earn through typical means so even the minimum wage jobs do not last long in the long run,” Amna said.

“Initially, we helped the community secure higher paying jobs in some startups with progressive environments and other small businesses,” she added.

She stated organisations with more educated people accepted them without much difficulty, but transgender people still face harassment when working for small businesses.

According to Amna, the organisation also offers medical aid to older members of the community.

As for future plans, the activist says she wants to create a shelter home, especially for young kids who run away from their homes. She wants to provide education and training in skills at these institutions.

LCWU all set to become a ‘smart university’