Doctor­s allege­dly refuse­d to treat Irfan Maseeh as he was covere­d in sludge
By Our Correspondent
Published: June 15, 2017
Tweet Email 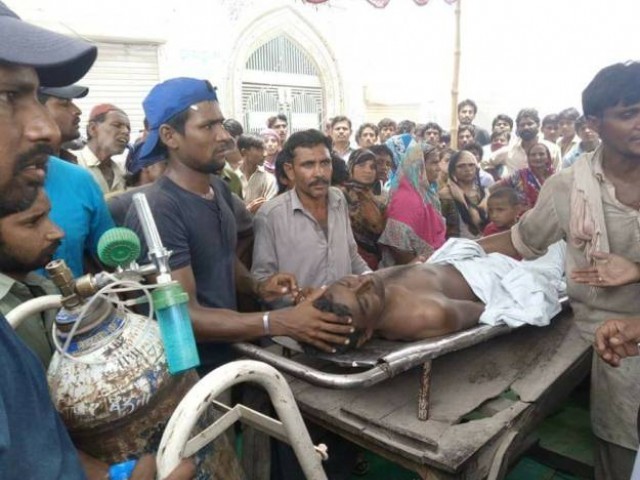 Irfan Masih's family and community members staged a sit-along with his body on the inter-district road connecting Umerkot. PHOTO: Twitter

HYDERABAD: A group of human rights activists have demanded a judicial inquiry into the death of a sanitary worker in Umerkot who allegedly died after medical treatment was refused to him at a local hospital.

At a press conference, addressed on Wednesday from the platform of Sindh Human Rights Defenders, the activists rejected the ongoing official inquiry as being partial to the accused.

Irfan Maseeh, 30, along with three other sanitary workers fell unconscious while cleaning a manhole in Umerkot. The local people pulled out the workers and took them to Civil Hospital, Umerkot, where the doctors allegedly refused to provide lifesaving treatment to Maseeh because his body was covered in sludge.

Advocate Ali Palh, peasants rights campaigner Punhal Sario and other rights activists told the press conference that after their recent fact finding visit to Umerkot, they are certain the assistant commissioner-led inquiry will not provide justice to Maseeh.

“The judicial inquiry should not only investiagate why Maseeh was not given treatment at the hospital but also why sanitary workers are forced to work without safety gear,” Palh demanded.

The activists suggested a range of measures, including employment security of the sanitary workers and implementation of safety rules, demanding the provincial government to act without delay to prevent the a similar tragedy.