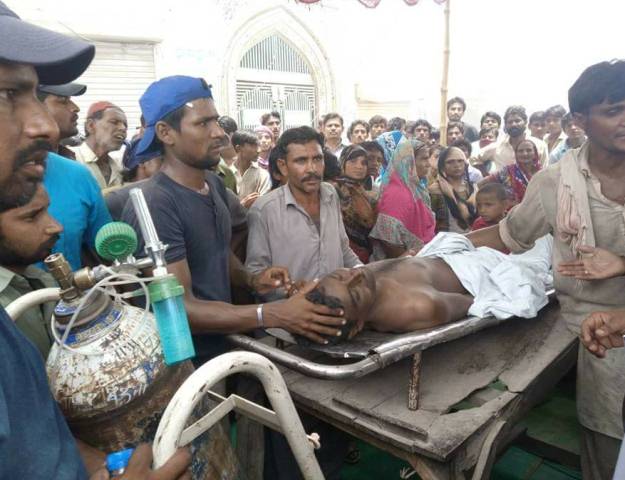 Ifran Masih's family and community members staged a sit-along with his body on the inter-district road connecting Umerkot. PHOTO: Twitter

UMERKOT: In yet another incident exposing the lack of conformity to safety rules and the alleged apathy of medical practitioners, a sanitary worker suffocated to death on Thursday in Umerkot. The deceased, 30-year-old Irfan Masih, fell unconscious along with three other sanitary staff while cleaning a manhole on Chorr Road in Umerkot.

He died hours later in the government hospital in front of doctors who were allegedly reluctant to treat him because Irfan was drenched in sewage sludge. The other three sanitary workers, Faisal Masih, Yaqoob Masih and Shaukat Masih, were referred to Hyderabad and later Karachi for medical treatment.

All of the workers fell unconscious while cleaning the central manhole, which had already claimed the lives of two sanitary workers, 25-year-old Krishan Gujrati and 28-year-old Nawaz Masih, in September 2012. Local residents pulled out the staff from the manhole and shifted them to the hospital.

“The doctors refused to treat him because they were fasting and said my son was ‘napaak [unclean]’,” claimed Irshad Masih, the mother of the deceased.

Pervez Masih, Irfan’s brother, said that he cleaned his brother’s body, after which the doctors sent an oxygen cylinder. “But the cylinder was empty. And, before they could arrange another cylinder, he [Irfan] died,” he told local media.

After Irfan breathed his last at the hospital, the family, community and locals staged a sit-in demonstration, along with the body, on the inter-district road connecting Umerkot to other parts of Sindh. The protest lasted for 10 hours before ending on assurances by Additional Deputy Commissioner Subhash Chandar Sham that an inquiry would be conducted against the municipal authorities and doctors.

“An inquiry team is being constituted to investigate the case. If the municipal officers or doctors are found to be involved … the government will take action,” he told the local media.

The protesting sanitary workers said that 60 daily wage workers are employed by the municipal committee in Umerkot. They alleged that the committee’s non-cadre officers Khalid Punjabi and Behari Lal compelled Irfan and others to work in the manhole without safety gear.

“They always threaten us with consequences of losing our jobs if we don’t obey their directives,” alleged Ghafoor Masih, a sanitary worker.

The municipal committee’s chairman or administrative officers could not be contacted for their versions.