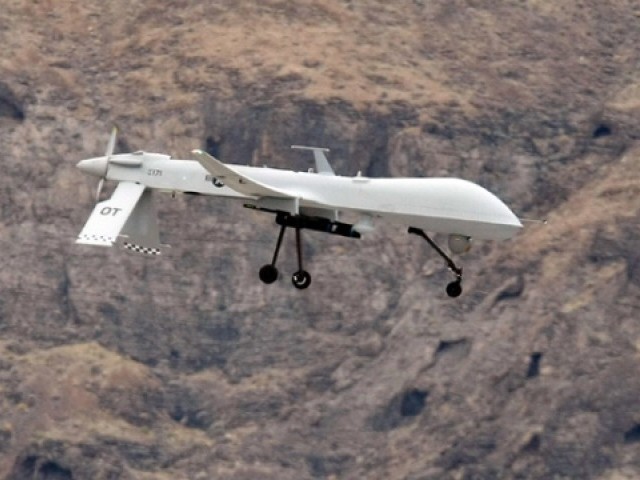 The two other killed in the pre-dawn attack were foot soldiers of the organisation from Paktita. PHOTO: AFP

PESHAWAR: A senior commander of a militant group allied with the Afghan Taliban was killed in a US drone strike in an area on the confluence of borders between Hangu district of Khyber-Pakhtunkhwa and Orakzai and North Waziristan tribal regions on Tuesday.

Two close aides of Abu Bakar Haqqani, a commander of the dreaded Haqqani Network, which is blamed for most violence against US-led foreign forces in Afghanistan, were also killed in the pre-dawn strike that took place in the Spin Thall area.

Officials said a remotely piloted US aircraft fired two missiles at a house being used by Abu Bakar Haqqani. They also confirmed that he was at home at the time of strike. Locals said a pilot-less aircraft had been seen hovering in the area.

The administration of Hangu and Orakzai agencies denied the village where the strike took place fell in their jurisdictions. Nonetheless they confirmed that three bodies had been pulled out from the rubble of the house. Security, administration and police officials said the missile strike ignited a huge fire which reduced the house to ashes.

Sources claimed Abu Bakar was a key commander of the Haqqani Network, while the two other slain militants were his close aides from the Paktika province of Afghanistan. Officially, there was no confirmation of the identities of the slain militants.

Pakistan frequently objects to drone strikes within its territory, calling them a violation of its sovereignty.

Meanwhile Sirajuddin Haqqani, the head honcho of the Haqqani Network, denied involvement of his group in the recent deadly attacks at Kabul’s diplomatic area and at the funeral of an Afghan politician.

“The Islamic Emirate of Afghanistan will never carry out any attack targeted at innocent civilians. We have had no role whatsoever in the Kabul attacks. We condemn the attacks and express remorse on the deaths of our Afghan brethren,” he said in an audio message.

“We stood up first against the Soviets and then against the US and its allies. Even if Afghan citizens don’t help us, shelter us or feed us, we will continue to save our country from infidels,” he said. “The Afghans celebrate the day of Soviet defeat in Afghanistan. And I assure you the day is not far when you will commemorate the day of American defeat in your country.”

Sirajuddin conceded a spike in civilian casualties in the Afghan insurgency and offered an apology to the Afghan people. “We haven’t started the jihad on the dictation of anyone. We are fighting to liberate our soil from foreigners who have shattered our country and divided us on ethnic lines,” he added.

(With reporting by our correspondents in Hangu and Miramshah)