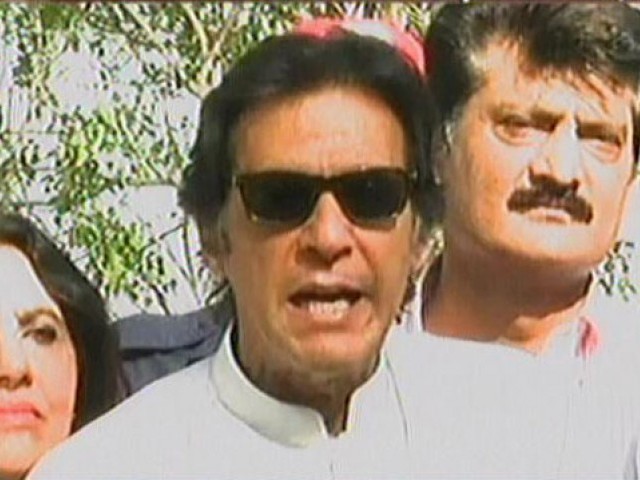 The demand came against the backdrop of recent complaints made by the JIT that certain state institutions were tempering with the record related to the probe into the Panama Papers leaks in a bid to protect the Sharif family.

“The revelation has endorsed my longstanding claim that Prime Minister Nawaz Sharif is influencing state departments to manage the investigation against the ruling family,” Khan said while addressing a news conference in Bani Gala.

He also demanded of the Supreme Court to make public the application of the JIT “so that people know about the tactics the rulers have been applying against the ongoing investigation”.

Linking the prime minister’s trip to Saudi Arabia to the Panamagate case, Khan said now no country would be able to protect the Sharifs.

“Their days are numbered. Now, it’s just a matter of two or three weeks,” Khan said, adding: “What will our global standing be in a situation like this when our premier has been facing an investigation and at the same time taking trips to different parts of the world.”

The PTI chairman said: “Creating impediments to the JIT working, which is an extension of the Supreme Court, is itself a crime.”

“It’s not the first time,” he claimed, adding that the Election Commission of Pakistan had produced fake documents supporting the government’s stance to a judicial commission that was formed to probe the rigging allegations during the general elections 2013 made by the PTI.

He said the current revelation also backed the finding of Justice Asif Saeed Khosa, who in the Panamagate judgment, wrote that “one person was destroying the state departments in a bid to protect his corruption”.

Justice Khosa headed the five-member bench that heard the Panamagate case which was split 2:3 in its verdict.

“These examples are enough to ascertain that state institutions are helping the royal family in their wrongdoings,” Khan observed, adding: “I have requested the apex court to make the JIT’s fortnightly reports public to ensure transparency at every level.”

Khan said the prime minister should resign before Thursday as he was facing a criminal investigation related to money laundering and tax evasion.

“In [the] past, [the] Sharif family never faced accountability because either they bribed judges or attacked them in case they failed to bribe them,” Khan said, adding: “Mafias usually kill people in case they fail to achieve the desired results by threatening or bribing individuals.”

He once again recalled the alleged Rs10 billion bribe offered to him by Punjab Chief Minister Shehbaz Sharif through a middleman, saying the Sharif family was the champion of buying loyalties.

He said when the Supreme Court announced the Panamagate judgment, the PML-N distributed sweets and felicitated the formation of the JIT because they were of the opinion that they would buy loyalties of JIT members easily, but it did not happen and now they were trying to make the probe team controversial.

Khan added that the refusal of the Qatari prince to record his statement in Pakistan was a sign that the case had ended for the Sharifs.

PTI warns of public protests in support of JIT, SC

He said the PML-N had lost the moral ground and Nawaz Sharif’s clinging on to the premiership was absurd despite the ongoing investigation.

Responding to a question, Khan said his supporters would remain orderly, but if the PML-N took to the streets during the PM’s appearance before the JIT, then his party would follow suit to show solidarity with the Supreme Court and the JIT.