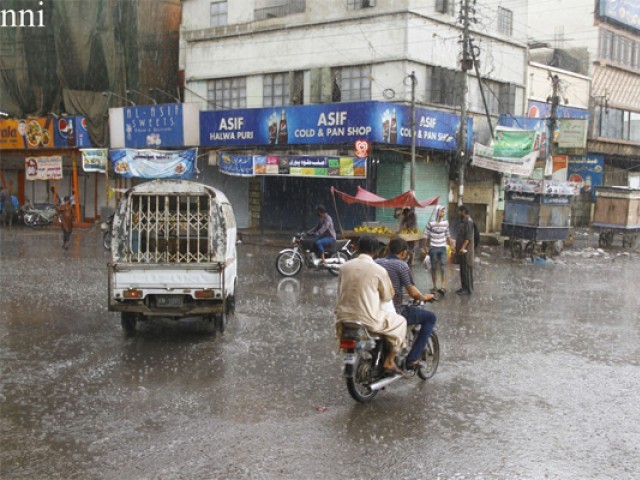 Mepco officials told The Express Tribune that power system was disrupted in 13 districts due to heavy rainfall and thunderstorm.

Officials said that 25,979 complaints were registered on toll free number of Mepco power control center. In various areas, 150 feeders tripped due to thunderstorm while electricity was restored after 12 hours in many areas of Multan, Muzaffargarh, Vehari, Sahiwal and Khanewal.

Earlier, four people died in Bahawalnagar alone, after thunderstorm hit the city, while others were wounded after roof of a house collapsed in Chauhang area. A woman died in a similar incident in Faisalabad.

Meanwhile, 40-year-old Abbas and his son Taimoor died of electrocution in Fazilpur. In Haroonabad, 5-year-old Hamza and her mother Asia, 33 died as the roof of their house caved in. In chishtiayan, 18 people suffered injuries when the sign board fell on them near Lorry Adda.

In another incident, Sattoo Mai, 80, died when the roof of her house collapsed due to rain and thunderstorm. In Dera Ghazi Khan District, a 15-year-old boy died after lightning struck him in Basti Zahraani of Darkhast Jamal Khan area. In yet another incident, Iqra, 3, died in Chak number 4 in sub district Chishtiyan as the roof of the house collapsed due to heavy rainfall.

Meanwhile, the roof of a house collapsed near Zahid Petrol Pump and as a result, 32-year-old Saima, Muhammad Arshad, 44, and their 18-year-old son Muhammad Haseeb were injured. Rescue 1122 officials shifted the injured to the Tehsil Headquarter Hospital, Shujabad for treatment. In Laar, the wall of a house collapsed in Basti Langranwan Mor Khan Garh resulting in injuries to a two-year-old Manveer and a 7-year-old Shahbaz, 7.

Over 28 people were reported injured in different incidents in Multan and Lodhran.

Rescue 1122 officials said the roof of Madrassa Ziaul Quran caved in due to heavy rains and wind storm and seven children, including Aqeela,8, Aleena, 8, Humaira, 7, Shaista,9, Farhat Ramzan,10, Rehana Perveen and Shabana, 8, suffered injuries. The injured were shifted to the Tehsil Headquarters Hospital for treatment.