Trump expres­sed readin­ess to find a soluti­on to the diplom­atic crisis in the Gulf
By AFP
Published: June 8, 2017
Tweet Email 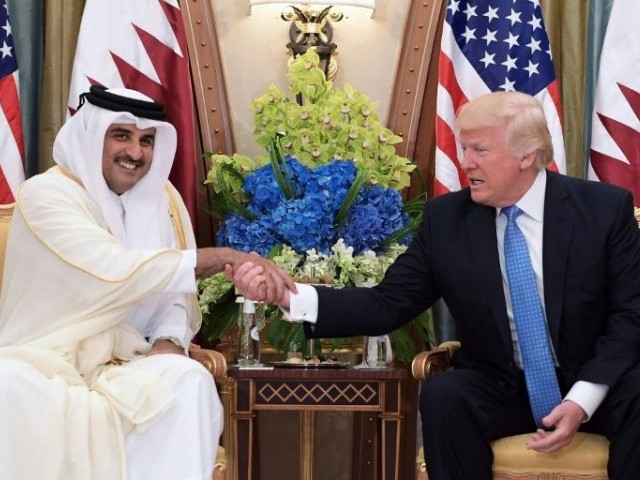 DOHA: President Donald Trump called Qatar’s emir on Wednesday and offered US help as efforts grew to resolve a damaging feud between the emirate and its Gulf neighbours.

“The president offered to help the parties resolve their differences, including through a meeting at the White House if necessary,” Trump’s office said after the call.

A Qatari official said Trump in the call had “expressed readiness to find a solution to the diplomatic crisis in the Gulf, and stressed his keenness that the Gulf remains stable.”

Saudi Arabia, Egypt, the UAE and Bahrain announced on Monday they were cutting diplomatic ties and closing air, sea and land links with Qatar, giving Qataris within their borders two weeks to leave. The four countries have suspended all flights to and from Qatar, pulled their ambassadors from Doha and ordered Qatari diplomats to leave.

Riyadh and its allies accuse Qatar of supporting militant groups and of serving the interests of regional arch-rival Iran, claims Doha has strongly rejected. The dispute has sparked the worst diplomatic crisis in the Arab world in years and raised fears it will cause further instability in an already-volatile region.

The United Arab Emirates’ state minister for foreign affairs Anwar Gargash on Wednesday accused Qatar of being “the main champion of extremism and terrorism in the region”. But he also said measures taken against Qatar this week by Saudi Arabia, the UAE and other Arab nations were not aimed at seeking new leadership in Doha. “This is not about regime change – this is about change of policy, change of approach,” Gargash told AFP in Dubai.

Kuwait is leading efforts to find a mediated solution. Its emir, Sheikh Sabah al-Ahmad Al-Sabah, on Wednesday arrived in Doha, where he was received by his Qatari counterpart, Kuwait’s official KUNA news agency said.

Earlier on Wednesday, he met Dubai’s ruler Sheikh Mohammed bin Rashid al-Maktoum and other senior UAE officials in Dubai, after talks the day before with King Salman in Saudi Arabia.

Turkey calls for dialogue over Qatar rift with Arab states

The Kuwaiti ruler played a pivotal role in mediating a compromise in a 2014 diplomatic dispute between Saudi Arabia, Qatar and other Gulf states.

The United States, France and Russia have called for dialogue while Turkey has defended Qatar and said it would further ‘develop’ ties with Doha. Turkey’s parliament on Wednesday approved deploying troops to a Turkish base in Qatar under a previously agreed plan, in a move seen as a sign of support for Doha.

Trump waded into the dispute on Tuesday, but seemed to only muddy the waters. After first appearing to back the Saudi-led measures against Qatar on Twitter, he shifted gears and called for unity among Gulf Arab states. Trump’s Tuesday tweet – in which he said “all reference was pointing to Qatar” as a financer of extremism – was especially surprising given Qatar’s role as host of the largest US airbase in the Middle East.

…extremism, and all reference was pointing to Qatar. Perhaps this will be the beginning of the end to the horror of terrorism!

Al-Udeid, located in the Qatari desert, is home to some 10,000 US troops and is a crucial hub in the fight against Islamic State group extremists in Syria and Iraq.

German Foreign Minister Sigmar Gabriel accused the US president of fanning conflict in the Middle East and risking a “new spiral in arms sales” with his remarks. “Such a ‘Trumpification’ of relations in a region already susceptible to crises is particularly dangerous,” Gabriel said.

Qatar has said it is open to talks to end the crisis but has also accused its neighbours of impinging on its sovereignty.

In a sign of the potential risks to Qatar’s economy, S&P Global Ratings cut Qatar’s credit rating by one notch to AA- and put it on watch for further downgrades. “There are numerous uncertainties regarding Qatar’s response, the extent to which these measures will be imposed, and their longevity,” said the ratings agency.

Qatar has an independent streak that has often angered its neighbours, attracting criticism for hosting the leaders of the Muslim Brotherhood and Hamas, and supporting rebels in Syria.

Saudi Arabia and its Gulf allies may have felt emboldened to move against Qatar by Trump’s visit last month to Riyadh, which saw the president clearly align US interests with the kingdom and lash out at Iran.

Riyadh has itself faced accusations of tolerating or even supporting extremists, in particular after the September 11, 2001 attacks in the United States. Of the 19 hijackers of planes used in the attacks, 15 came from Saudi Arabia, also the birthplace of Al-Qaeda founder and attack mastermind Osama bin Laden.

US might expand laptop ban to 71 airports: Homeland Security