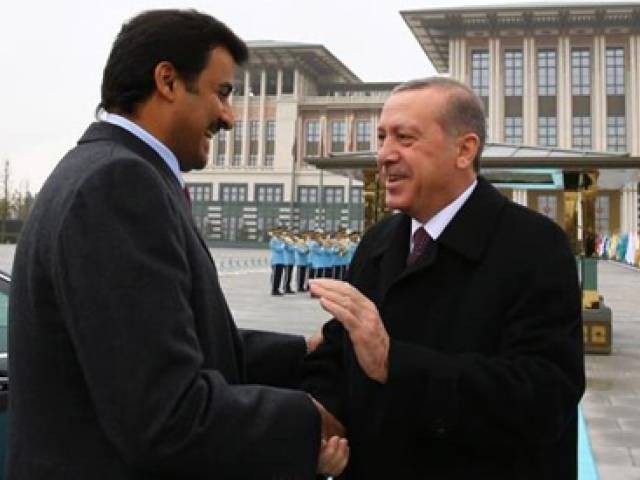 ANKARA/DOHA: Turkey threw its support behind Qatar on Wednesday, with officials saying it could fast-track troop deployment and provide crucial food and water supplies to the Gulf Arab country facing isolation from some of the biggest Middle Eastern powers.

In the deepest split between Arab states for decades, Saudi Arabia, Egypt, the United Arab Emirates (UAE) and Bahrain severed relations with Qatar on Monday and closed their airspace to commercial flights, saying it was funding militant groups. However, Qatar vehemently denies the accusations.

Turkish President Tayyip Erdogan has said isolating Qatar would not resolve any problems. Erdogan, who has long tried to play the role of a regional power broker, said Ankara would do everything in its power to help end the regional crisis.

Lawmakers from Erdogan’s ruling AK Party and the nationalist opposition MHP on Wednesday proposed bringing forward approval of a draft bill that will allow Turkish troops to be deployed to Turkey’s military base in Qatar, party officials told Reuters.

Turkey has maintained good relations with Qatar as well as several of its Gulf Arab neighbors. Turkey and Qatar have both provided support for the Muslim Brotherhood in Egypt and backed rebels fighting to overthrow Syrian President Bashar al-Assad.

The Turkish parliament was also set to bring forward approval of a draft accord between the two countries on military training cooperation, the officials said.

Both bills, which were drawn up before the spat erupted, are expected to be approved by the Ankara parliament on Wednesday. Turkey’s lira weakened after the move.

Turkey’s main exporting industry body said it was ready to meet food and water supply demands from Qatar, after a Qatari official said Doha was in talks with Iran and Turkey to ensure trade disruptions did not create shortages.

Grain traders said Qatar appears to have a comfortable immediate supply of wheat.

“Qatar recently purchased about 20,000 tonnes of Russian milling wheat which according to my calculations has just arrived in past days or will arrive in coming days,” one European grain trader said.

The president of Qatar’s Chamber of Commerce was quoted on Wednesday by local media as saying Qatar had enough food stored in strategic reserves to last for a year.

“There will be no shortage of food and other products as more than 95 percent of imports from Qatar arrive by air and sea,” Qatari Sheikh Khalifa bin Jassim al-Thani said.

Turkey set up a military base in Qatar, its first such installation in the Middle East, as part of an agreement signed in 2014. In 2016, Ahmet Davutoglu, then Turkish prime minister, visited the base where 150 troops are stationed, the Turkish daily Hurriyet reported.

In an interview with Reuters in late 2015, Ahmet Demirok, Turkey’s ambassador to Qatar at the time, said 3,000 ground troops would eventually be deployed at the base, which was primarily to serve as a venue for joint training exercises.

The text of the draft bill, which includes the agreement between Qatar and Turkey on the base, shows the cooperation will be primarily about the modernisation of Qatar’s military institutions, as well as widening cooperation in training and joint war exercises.

Actor mistaken for terrorist after rehearsing on French train