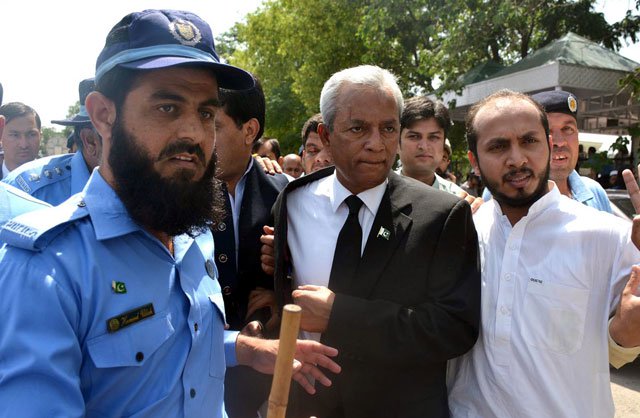 “I hereby pronounce that the notice issued for personal appearance of
Senator Nehal Hashmi at 10:00 am on June 7 in the Chamber of the Chairman Senate has become infructuous… the resign stands withdrawn,” said Mian Raza Rabbani in his ruling.

The chairman added that the PML-N senator had requested him to withdraw the resignation in a meeting with him in the chamber. Rabbani asked the Senate secretary to convey the development to Raja Zafarul Haq, leader of the house and parliamentary leader of the ruling party.

Hashmi handed in his resignation on May 31 after a video went viral in which he was hurling implied yet obvious insults and threats at the judiciary and the Joint Investigation Team (JIT) probing into the ruling family’s offshore properties in line with the apex court’s April 20 verdict in Panamagate case.

After the emergence of the controversial speech, the ruling PML-N had suspended Hashmi’s party membership. The Supreme Court’s three-judge bench overseeing the JIT had also taken suo motu notice of Hashmi’s speech and served him a show cause notice.

Later, the PML-N leader changed his plan as he requested Rabbani not to accept his earlier resignation. “It is to bring in your kind notice that the resignation in question had to be furnished under quite unusual circumstances. It now necessitates its immediate withdrawal as it was completely under stressful atmosphere,” Hashmi said in his application to Rabbani on Tuesday.