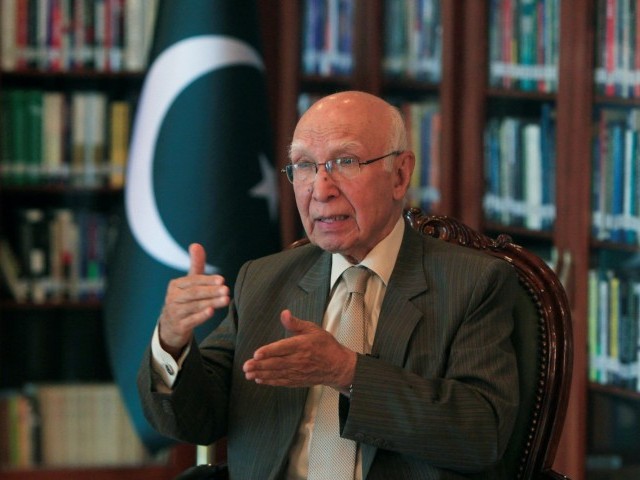 ISLAMABAD: Advisor to Prime Minister on Foreign Affairs Sartaj Aziz will brief the Upper House of Parliament on Wednesday (today) on the contentious issue of Saudi Arabia-led military alliance and Pakistan’s possible role in it.

Government’s apparent reluctance to divulge details about the Saudi-led military alliance had irked Senate Chairman Raza Rabbani who served notices on the ministers and the secretaries of defence and foreign affairs to appear in the House and satisfy the members on the issue.

The issue came to limelight when the house took up a calling-attention notice from Farhatullah Babar of the PPP, seeking government’s response on reported statements from the Saudi authorities that the Islamic Military Alliance would not only be restricted to terrorist organisations like Da’ish and al Qaeda but it would also act against any rebel groups posing threat to any member country.

Senator Babar had submitted the notice on April 25. But the ministries of foreign affairs and defence kept shifting to each other the responsibility of responding to the notice all this while.

“Do not make parliament ping-pong. I will not tolerate it. This notice was submitted in the Senate secretariat on April 25. It was sent to the Ministry of Defence on May 2 and they informed us yesterday that the matter does not come under their domain. The Foreign Ministry on the other hand [is] saying it is [for] the Ministry of Defence to explain,” remarked a perturbed Rabbani.

Before the sitting concluded, the Senate Secretariat informed the chairman that the PM’s advisor on foreign affairs was on his way to brief the House. Since the mover of the calling-attention notice had already left the House, Rabbani directed the PM’s advisor to give his policy statement on Wednesday (today).

Earlier, members from both sides took part in the debate on budget.

PPP Senator Sherry Rehman expressed dismay over the budget, saying the government had shattered people’s hopes for a better life by telling them it would continue to tax them to account for its own profligate spendings.

“It is appalling to observe that around 82 to 85 per cent of the taxes gained are indirect. The brunt of these failed policies is borne by the poor citizens of the country. They are the ones reeling from power outages, they do not have access to generators, they do not have the cash to buy an extra fan or pay their utility bills,” Sherry Rehman said, speaking on the floor of the Senate.

Saudi-led alliance not aimed against any country: Tehmina

She questioned the government on the ‘withering’ tax base and said, “For a country that cannot pay for itself and wants to be sovereign, how is the tax filer base shrinking? Should the poor also shoulder the lavish expenditure of the government?”

The PPP senator continued: “From Kashmir to Karachi, the country is under darkness not only due to loadshedding, but [also] because we are drowning in the debts. On top of that, the government has added surcharges on electricity which will make the poor poorer under these new schemes.”

He said Pakistan is ostensibly spending two per cent of its GDP on education, but “if we take into account over Rs800 billion being spent on education by the private sector, it actually comes to 4 per cent of the GDP”.

But additional budget alone would not work, he said, adding that even today over 22 million children are out of school. “This aspect has to be looked into by the provinces,” he said, citing the ‘leading example’ of Punjab which brought more than 3 million children to school in the past four years.

“Unfortunately, progress in this regards in Sindh is zero,” he said. “We must get out of parochialism and provincialism and adopt nationalism to promote education” he added.

Gen Raheel off to S Arabia to lead Islamic alliance

Senator Farhatullah Babar, in his speech, said that the budget sought to ambush the Supreme Court, shut the door on Fata reforms, launch a bristling attack on the human rights and fail to inject even token transparency and accountability in the military spending structures.

He said for the first time, the total financial powers were vested in the executive in “an ambush of the Supreme Court'”. “This is the foremost political statement of the budget,” he said.