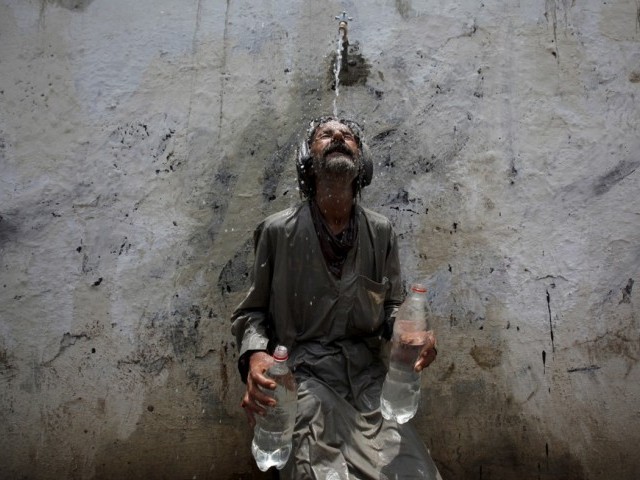 Met official predicted that the weather would remain hot throughout the fasting month of Ramazan. PHOTO: REUTERS

LAHORE: The number of dehydration, gastro and diarrhoea cases has surged in Lahore’s main hospitals as another spell of scorching heat hit the provincial capital.

According to data collected from different hospitals by The Express Tribune, at least 300 people have already been admitted to different hospitals of Lahore. Moreover, the death toll due to dehydration, gastro and diarrhoea is not being recorded to play down the issue.

“I understand that it is boiling outside and it is impossible for travelers to refrain from having drinks and food from roadside eateries,” commented Dr Salman Kazmi, a physician at Mayo Hospital.

“It is alarming that almost 80% of cases reported at Mayo Hospital have occurred due to consumption of unhygienic drinks from roadside eateries,” he remarked. “What we all fail to understand is that the desire to satisfy the taste buds and save a few rupees could land a person in trouble.”

He said food being sold in the open could prove dangerous as carbon dioxide released from vehicles and dust affects drinks and uncovered edibles.

Though these eateries are found across the city, the major concentration is in Gulberg, Muslim Town, Thokar Niaz Baig and Mazang. The city’s old area is already famous for roadside eateries where people can be seen eating well into the night.

A senior health department official, requesting anonymity, said there was no record of data of dehydration, gastro and diarrhoea cases from private hospitals. “If we collect all data, the figure will be horrifying,” he added.

An ENT specialist at Mayo hospital Dr Owais Samee suggested that schoolchildren must wear masks and avoid direct sun exposure as it would cause heatstroke.

While talking to The Express Tribune, a health department spokesman said all medicines to treat waterborne diseases and heat strokes are available in hospitals’ stock and administrations are aware of the threats of such ailment as well as heatstroke.

“We have advised people to avoid unhygienic drinks as prevention is always better than the cure,” he concluded.