The govern­ment must adhere to the policy of cooper­ating agains­t terror­ism only
By Imdad Hussain
Published: May 26, 2017
Tweet Email 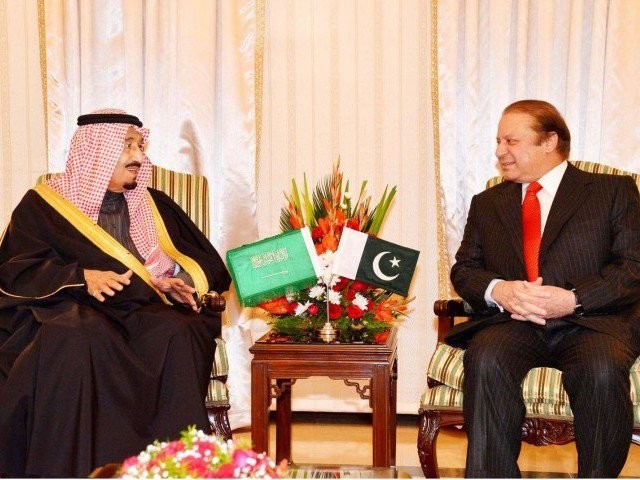 The government must adhere to the policy of cooperating against terrorism only. PHOTO: PID/FILE

US President Donald Trump, addressing the Arab-Islamic-American summit in the capital of Saudi Arabia, urged Arab leaders to “drive out” terrorism from their countries on Sunday in a speech that put the burden on the region to combat militant groups. Irrespective of the debate about not allowing Prime Minister Nawaz Sharif to speak on this occasion, the outcome of the moot is being considered as a serious setback for Pakistan’s foreign policy. Pakistan has to decide, it is willing to jeopardise its relations with Iran for Saudi Arabia.

The two-day Riyadh summit focused on Isolating Iran as it paid attention to countering terrorism. In fact, it portrayed an impression to the world that terrorism and Iranian regimes come together. During the summit, President Trump clearly talked about isolating Iran, which followed a historic $110 billion arms deal with Saudi Arabia. While King Salman, who has also recently established an Islamic Military Alliance to Fight Terrorism (IMAFT), openly blamed Iran for promoting terrorism and insecurity in the region.

Saudi-Iran rivalry aside, does Muslim world need a military alliance?

Pakistan became a part of the controversial 34-state, Saudi-led military alliance earlier this year, and former army chief General (retd) Raheel Sharif has gotten the nod from the centre to lead IMAFT. Several countries from Asia, Africa and the Arab world are involved in the alliance, but Saudi Arabia’s main regional rival Iran is not. IMAFT’s joint operations centre has been established in Riyadh.

Observers believe that newest Saudi-led block is to counter Iran’s growing influence in Syria, Iraq and Yemen. Iran, which also shares a 900-kilometre border with Pakistan, has serious reservations over General (retd) Raheel’s selection as the head of the Saudi-led military alliance of Muslim countries to combat terrorism.

Pakistan’s decision to join the alliance was followed by claims that Islamabad would work to create harmony between Riyadh and Tehran. Many at home criticised Pakistan’s take on it. The opposition said that joining the IMAFT was against a resolution adopted by the parliament that barred Pakistan from indulging in the ongoing Middle Eastern conflict.  In 2015, a unanimous resolution passed by a special joint session of parliament urging it to stay out of the conflict in Yemen, where the Saudi-led coalition was bombing Houthi rebels.

Following Trump’s address at the Riyadh summit, Iranian President Hassan Rouhani has clarified that stability could not be achieved in the Middle East without Tehran’s help.

When it is obvious that the Islamic military alliance is not friendly towards Iran while Syria and Iraq are also not part of it, the dream Muslim countries on one platform against terrorism seems to be a tough task to achieve. US, Russian, and Israeli involvement is further complicating the entire issue.

Saudi Defence Minister Mohammed bin Salman has said the new alliance would coordinate efforts against militants in Iraq, Syria, Libya, Egypt and Afghanistan and this should be alarming for Pakistan because to varying reasons.

Firstly, Pakistan cannot afford to corner Iran by damaging its bilateral terms. The geopolitical situation in the region are also creating difficulties for Pakistan as three of its four neighbours – India, Iran and Afghanistan – are accusing Pakistan of letting terrorists use its soils for harbouring attacks in the neighbouring countries. The situation can deteriorate in the near future if they join their hands against Islamabad. Pakistan has always contested US pressure that it was not taking ‘adequate action’ against terrorist groups.

On May 23, US Defence Intelligence Agency (DIA) Director Lieutenant General Vincent Stewart warned that India was considering punitive actions against Pakistan for its alleged support to cross-border terrorism.

Secondly, in the case of a possible division amongst the member Islamic countries, the deal will worsen the Sunni-Shia rift in Pakistan when incidents of sectarian violence are frequent particular in Balochistan province.

Lastly, the entire crisis does not only involve Muslim countries, it has also now dragged Washington into a confrontation with Russia in the six-year-long Syrian war. Here the US-backed Syrian Democratic Forces, the Russian-backed Syrian military, and Free Syrian Army rebels backed by the United States are fighting against the Islamic State. When Iran and Russia want Syrian President Bashar al-Assad to stay in power, Washington struggles for his elimination. The US-Russia relations at a new low since the deadly gas attack in Syria on April 4, 2017.

The Saudis are also suspected of supporting a variety of groups fighting the Assad regime Syria and, under the circumstances, Pakistan will be willing to avoid any involvement in these countries.

The rivalry between Saudi Arabia and Iran is fuelling conflicts across the region. The two regional powers have been at loggerheads since the Iranian Revolution in 1979 when the western-backed regime was ousted. The ideology of Iran, coupled with allegedly supporting certain militant elements in the Middle East, has caused a rift between the two nations. Regional conflicts such as in Iraq, Syria and Yemen, can also be blamed for complicating bilateral and diplomatic relations between Saudi Arabia and Iran.

Their rift is not religious but it has been manifested along the sectarian lines, desiring a strong influence in the region. Both Saudi Arabia and Iran are being accused of supporting militants in the region.

Iran’s Ambassador Mehdi Honardoost met Army Chief General Qamar Javed Bajwa twice in April in an apparent effort by the two sides to iron out differences on Pakistan’s move to allow the former army chief to head the Saudi-led counter-terrorism alliance. Pakistan also cajoled Iran by launching a diplomatic initiative to convince Tehran to join the coalition and bring about a rapprochement between Tehran and Riyadh, but nothing came of it.

In addition, the US and Israel have been considering Iran a global threat. Speaking at the Riyadh summit, Trump had said that Iran was responsible for instability in the region and was funding, arming and training militias that spread destruction and chaos.

Iran-backed Lebanese Shia group Hezbollah on May 25 also criticised Saudi Arabia, saying it was on a losing path to more bloodshed in its struggle with Iran and instead urged Riyadh to seek dialogue and negotiations with Tehran. How Pakistan will deal will both Saudi Arabia and Iran is a real challenge.

Can Pakistan be neutral?

It is tough for Pakistan to convince Saudi Arabia and Iran to keep their ideologies aside and not interfere in each other’s affairs, particularly in the presence of influential players like the US and Russia in the region. Pakistan has to decide that whether it should withdrawing from the IMAFT and damages its relations with a close ally like Saudi Arabia, or whether it can annoy  Iran by being a part of it.

The Pakistan Muslim League-Nawaz (PML-N) government must adhere to the policy of cooperating against terrorism only in the Saudi-led block being a neutral partner. It should not be a careless decision because Pakistan’s position in the region will be at stake. Parliament seems to be the best place to take a unanimous decision about Pakistan future plan.

Saudi Arabia, Iran and other stakeholders must be taken into confidence before using the option of ‘neutrality but cooperation against terrorism’ for which the chances are slim.